Seasons (February 18th and 19th at the Cleveland Cinematheqe) 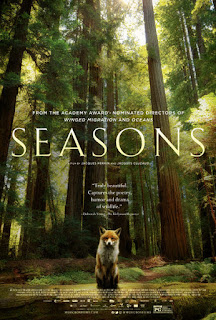 Using the seasons as metaphor for the larger passage of time, SEASONS depicts in its own poetic way how, post ice-age, wildlife has moved from a vibrant spring ("The Golden Age of the Forest", the film's narrator proclaims in subtitled French) and summer to a more perilous fall and winter. The villains responsible for the decline of animal life, perhaps not too surprisingly, are us.

To that end, along with the nature footage there are some staged moments of human/animal encounters that help illustrate the film's thesis. At first these relations are relatively benign, as a young boy feeds a wolf. But as humans expand their territory and raze forests to replace them with fields for growing crops, wildlife becomes displaced. Hunting, industrialization, wars, and other human developments don't benefit the wildlife much, either. This is not the movie to see if you want to feel good about being human.

The message is mostly kept in the background for the first half, though. This affords viewers the opportunity to simply sit back and enjoy the wildlife footage, with only occasional narration to put the sights into some kind of context. This portion of the film, though it will certainly be compelling to wildlife enthusiasts, will likely come off as shapeless and meandering to many viewers, this one included.

From a cinematic standpoint SEASONS doesn't gel together until it starts laying a guilt trip on humanity in its second half. But while it does help give the film some direction, it also comes across as simultaneously heavy-handed and strangely abstract. Sometimes, it feels like humanity is being given a (probably deserved) harsh dressing down. At other times, it's unclear what point, if any, we're supposed to take away. Also detrimental to the overall effect are the scenes with human actors in various period outfits that often feel kind of cheesy.

Still, the nature photography is probably enough to draw an audience, and as with co-directors Jacques Perrin and Jacques Cluzaud's previous films WINGED MIGRATION and OCEANS, that part is stunning. The ample, up-close-and-personal footage of wolves, wild horses, lynxes, buffalo, and various smaller critters should be more than enough to keep most animal aficionados happy. 2 ½ out of 4 stars.
Posted by Bob Ignizio at 12:00 AM