Saving Banksy (March 2nd and 5th at the Cleveland Cinematheque) 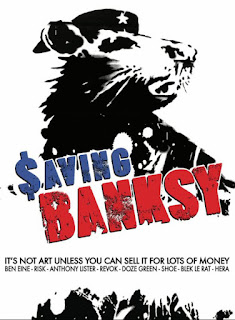 Where is the line drawn between graffiti as vandalism, and "street art", and who gets to decide? And once that line is drawn, is there a responsibility to try and preserve those pieces considered to be works of art, or should the wishes of the artists that they ephemeral things, to be enjoyed while they last before being covered up either by other artists/vandals, or in many cases painted over by civic authorities who don't share the appreciation some have for this art form? These are the questions at the heart of Colin Day's documentary SAVING BANKSY.

The secretive Banksy is easily the best known street artist among the general public. He has placed "street art" all over the world, including a number of pieces in San Francisco. Most of those pieces have been covered up, either because of a law (since repealed) that held building owners liable for graffiti on their property, or because others painted over it with their own graffiti/street art.

There is, however, one Banksy painting – one of his iconic rats – that remains untouched. This leads an art collector to try to make a deal for the piece with the building's owner. Not to profit from it, but to preserve it. This is gentleman is contrasted with an art dealer who claims to be preserving Banksy's work for future generations, but whatever his motives, seems to be making a tidy sum for himself in the process.

SAVING BANKSY is a relatively short film that nonetheless manages to provide a suitably illuminating and entertaining look at an aspect of modern art not everyone is aware of or understands. It may not be as "important" as the latest political documentary, but if you're interested in the often sticky intersection of art and commerce, there's plenty here of interest. 3 out of 4 stars.
Posted by Bob Ignizio at 12:00 AM