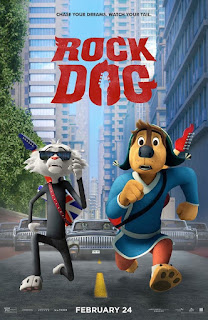 Stop me if you've heard this one before. In ROCK DOG, a misfit protagonist leaves home to go on a quest to find self-confidence, defeat a bunch of generically evil bad guys, and win the understanding and approval of his stodgy father. Along the way, he learns valuable lessons about following one's dreams, staying true to oneself, and the power of music.

Director/co-writer Ash Brannon may have gotten his start at Pixar, for whom he co-wrote and co-directed TOY STORY 2, but there's none of the heart, humor, or overall quality one would expect from that studio on display in ROCK DOG. This is an utterly disposable, by-the-numbers kid flick.

The lovable misfit here is Bodi (Luke Wislon), the son of Tibetan Mastiff Khampa (J. K. Simmons). Khampa looks out for the sheep of his mountain village using a special martial arts power, and he expects Bodi to follow in his footsteps. But the kid just wants to rock.

Dad finally realizes Bodi has to at least try to make a go of it in the music business, so he sends him off to the big city with his blessing. There, Bodi meets rock star Angus Scattergood (Eddie Izzard). Angus isn't too keen on dealing with Bodi until he gets the bright idea to swipe some musical ideas from the young "Rock Dog". Meanwhile, a group of wolves led by Linnux (Lewis Black) are busy plotting how they can get to the sheep back in Bodi's village. As almost an afterthought, there's a female fox bass player named Darma (Mae Whitman) as the obligatory pseudo love interest.

This is about as generic a kid flick as you could imagine. Usually these things at least have a few jokes to keep the geezers like me engaged, but almost all of ROCK DOG's attempts at humor fall flat. And as for the "rock" portion of the movie, it's mostly bad middle of the road crap that doesn't jibe in any way with the scenes of Bodi and Angus shredding metallic leads. My six-year-old still liked it, and your younger kids probably will, too. But really, don't you owe them better? 1 out of 4 stars.
Posted by Bob Ignizio at 8:32 PM