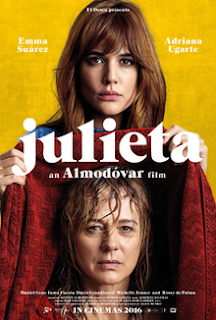 With JULIETA, noted Spanish director Pedro Almodovar finds himself in familiar territory, returning to the sort of female-centric family drama he's best known for after the less than stellar reception of his 2013 airborne farce I'M SO EXCITED. The story of the titular character, played in the present by Emma Suárez, is set in motion when Julieta learns that her estranged daughter Antia, who she hasn't seen in years, may be living in Madrid. This happens just as she's about to leave said city behind for a permanent move to Portigal with her lover Lorenzo (Dario Grandinetti). This new information leads Julieta to throw all her plans out the window so she can track down her estranged daughter and hopefully reconnect.

Julieta explains her change of plans to no one, instead writing them down in a notebook for Antia. This being a movie, that triggers a flashback so we the audience can see the various events that led to mother and daughter going their separate ways.

As a younger woman, Julieta (played by Ardian Ugarte in the flashbacks) has a chance encounter with an older man who tries to make conversation. Julieta rebuffs him, moving on to another train car where she meets Xoan (Daniel Grao), an attractive married man whose wife is in a coma. Julieta is much more pleased to carry on a conversation with him.

When the older man later kills himself by jumping in front of the train, leaving behind only an empty suitcase, Julieta feels guilty about brushing him off. Perhaps if she had reached out and offered some human contact, he wouldn't have gone through with it. Seeking comfort for herself now, Julieta finds it in the arms of Xoan.

Julieta and Xoan's tryst eventually leads to a serious relationship and the birth of Antia. But not all is well, and the revelation of a secret leads to tragedy.

Regrets over things said, and especially things left unsaid, are at the heart of JULIETA. All the main characters keep secrets from each other, leaving them open to being hurt when the truth comes out (often thanks to Xoan's housekeeper, Marain (Rosy de Palma).

The film is shot in Almodovar's trademark colorful visual style, with his ever present Hitchcock influence coming through strong. Even though it's not really a thriller or suspense movie in the traditional sense, JULIETA often feels like one, right down to the Bernard Herrmann-esque score.

But make no mistake; whatever influences may be present, this is without a doubt an Almodovar film with its focus on female characters and other recurring motifs, such as mother issues and even minor callbacks like Xoan's comatose wife, recalling 2002's TALK TO HER. It's not as wild and edgy as much of the director's work, but hell, even John Waters has mellowed with age. JULIETA may not generate the controversy of a TIE ME UP, TIE ME DOWN, but it's nonetheless an enjoyable film that fits quite nicely in its director's body of work. 3 ½ out of 4 stars.
Posted by Bob Ignizio at 1:02 PM