[I AM NOT YOUR NEGRO opens in Cleveland on Friday February 10th exclusively at the Cedar Lee Theatre.] 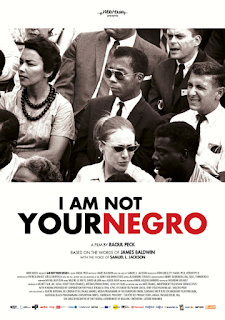 “To be a Negro in this country and to be relatively conscious is to be in a rage almost all the time,” said the writer James Baldwin (1924-1987), an eloquent commentator on race relations in the United States, even though he spent a large portion of his life abroad. He was the author of numerous essays, plays, novels and speeches that spoke powerfully of the experience of black people and the struggle for justice. In the '50s and '60s, the Harlem-born Baldwin wrote books including the semi-autobiographical Go Tell It On The Mountain, Notes of a Native Son, Nobody Knows My Name and The Fire Next Time.

At the time of his death from stomach cancer at age 63, Baldwin had left unfinished a manuscript titled Remember This House. The book was to be a memoir of his friendships with three murdered civil rights leaders, Medgar Evers Malcolm X, and Martin Luther King, Jr. Haitian-born filmmaker and political activist Raoul Peck has taken that fragment and imagined a completed work by Baldwin. In I AM NOT YOUR NEGRO, Peck has created a filmed essay, with Baldwin's words read by Samuel L. Jackson, footage from Baldwin's many speeches and television appearances (he was a regular guest on the Dick Cavett show in the late '60s), and archival images of the history of racial oppression and resistance. The film also incorporates events such as the killing of Trayvon Martin, police murders of unarmed black citizens, and Black Lives Matter demonstrations, events Baldwin did not live to witness.

“The brutality with which Negroes are treated in this country simply cannot be overstated,” Baldwin wrote in the 1963 The Fire Next Time, “however unwilling white men may be to hear it.” The book's title was taken from a Biblical song of a slave “(God gave Noah the rainbow sign/No more water, the fire next time!”). Baldwin wrote: “If we — and I mean the relatively conscious whites and the relatively conscious black, who must, like lovers insist on, or create, the consciousness of others — do not falter in our duty now, we may be able, handful that we are, to end the racial nightmare and achieve our country, and change the history of the world.” If we do not, the next time, fire.

Even in his bitterest writings (the 1974 novel If Beale Street Could Talk), Baldwin remained hopeful that brotherhood could be achieved. He wrote in praise of African-American “children of kindergarten age who can go through mobs to get to school,” connecting their nobility to their ancestral strength. “Negro boys and girls who are facing mobs today come out of a long line of improbable aristocrats,” he wrote, “the only genuine aristocrats this country has produced.”

The civil rights movement is often described as divided between the nonviolent approach of Dr. Martin Luther King Jr. and the “by any means necessary” call to action by Malcolm X and later, the Black Panthers. Baldwin's views fell somewhere in between poles of optimism and bitterness. He was not a separatist like Elijah Muhammad and the early Malcolm X, though he did share Malcolm's deep intellect, experience of oppression, and rage. “I was icily determined,” Baldwin wrote in The Fire Next Time, “to die and go to Hell before I would let any white man spit on me, before I would accept my 'place' in this republic.”

Of the Black Muslim movement, Baldwin wrote, “Things are as bad as the Muslims say they are — in fact, they are worse...there is no reason that black men should be expected to be more patient, more forbearing, more farseeing than whites; indeed, quite the contrary.” Yet he did, like his friend Martin Luther King Jr., believe not in separatism but in integration and universal brotherly love. “From my point of view — no label, no slogan, no party, no skin color, and indeed, no religion is more important than the human being.” Baldwin returned from Paris, where he had found greater acceptance, to take part in Dr. King's marches and demonstrations. “All men are brothers — that's the truth,” he said.

Though he shared the views of both camps, neither fully accepted him. King's followers in the Southern Christian Leadership Council saw him as a radical (his 1964 play Blues for Mister Charlie, ends with a preacher at the pulpit with a gun in one hand and a Bible in the other), and he was not asked to speak at the March on Washington, even though he was the most prominent black American writer at the time. Black Panther leaders Bobby Seale, Huey Newton and Eldridge Cleaver attacked Baldwin as a sellout (to his race and also his manhood, according to Cleaver, by being openly gay).

One of Baldwin's functions was an explainer, who articulated the black experience to white people (which made the Cavett Show an ideal forum for him). “The black man doesn't hate the white man. He wants him out of his way. More than that,” he said, “he wants him out of his children's way.”

The film recounts Baldwin's experiences with the civil rights movement — marching with King, being surveilled by the FBI, attending a discouraging meeting with Attorney General Robert Kennedy. He recalls the last time he saw Medgar Evers, the NAACP field secretary who was murdered in his driveway in Mississippi, where he was heading a voter registration drive. “I remember a bright, blunt, handsome face, his weariness, which he wore like his skin.”

One element of Baldwin's work that resonated with the film's director, Raoul Peck, is his more global and inclusive view of human rights. Baldwin believed that America needed to change its view of itself as superior to other cultures and embrace universal human rights (including those of women, gays, the poor, the elderly, the disabled) if it was to survive. In this regard, Baldwin was ahead of his time. After a period of neglect, Baldwin's work has received renewed attention; his writings particularly resonate with today's younger activists. The Fire Next Time was a direct inspiration for Ta-Nehisi Coates' award-winning book Between the World and Me, leading author Toni Morrison to pronounce Coates, somewhat hyperbolically, “the James Baldwin of our time.”

The film spends a lot of time on rather obvious critiques of popular culture, juxtaposing images of lily-white Hollywood (Doris Day, John Wayne, kitchen appliance commercials) and the bodies of lynched black men.. Peck explained to the Wall Street Journal: “Baldwin talks about television and the entertainment industry as something similar to the use of narcotics.” As a young boy growing up in Port-au-Prince, Peck loved movies and admired the handsome image of Sidney Poitier in Guess Who's Coming to Dinner, but says he was vaguely troubled by it. He found an answer in Baldwin's writings.

“Baldwin explained that they were using Sidney against us and making him something we, the majority, could never be. They set the bar very high and said, if you can't be Sidney, stay in your ghetto. Baldwin helped us deconstruct the whole Hollywood creator of the Black image. Film and images are not innocent. There are many layers delivered in those beautiful law, adventure, sci-fi and horror stories. They bring things that prevent you from understanding who you really are.”

This arresting documentary, which has been nominated for an Academy Award, revives Baldwin's words and ideas, which are more relevant and necessary than ever. It succeeds in bringing this important writer into the consciousness of a new generation. 4 out of 4 stars.
Posted by Pamela Zoslov at 12:00 AM