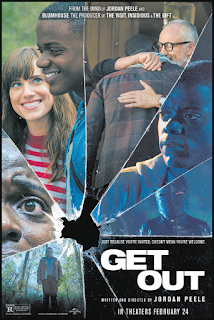 Jordan Peele is best known for being one half of the comedy team Key and Peele, so you might expect his first film as writer/director would be an overt comedy. Instead, he has produced a potent mix of social commentary, and horror. Sure, there's some humor. But with GET OUT, Peele is more concerned with building slow-burn suspense, hitting viewers with visceral shocks, and leaving them with insights on race than he is with getting a laugh.

The film's set-up is that fine-art photographer Chris (Daniel Kaluuya) is preparing to meet his girlfriend Rose's (Allison Williams) parents for the first time. She hasn't told them that Chris is black, but assures him they aren't racist. Nonetheless, Chris' best friend and TSA officer Rod (Lil Rel Howery) is worried that his pal could be walking into an awkward situation.

He doesn't know the half of it.

On the surface, Rose's neurosurgeon dad Dean (Bradley Whitford) and psychiatrist wife Missy (Catherine Keener) seem nice and open minded. Missy is a bit pushy about helping Chris kick his cigarette habit, and Dean probably tries a bit too, remarking how he would have voted for Obama a third time if he could have, but they don't seem to have any problem accepting their daughter's choice of boyfriend.

But there are signs that all is not as it seems. Rose's brother makes some insensitive talk about "genetic stock' at the dinner table. And then there's the help. Groundskeeper Walter (Marcus Henderson) and maid Georgina (Betty Gabriel) kind of creep Chris out. It's not just the stereotype of upper middle class white folks having black hired hands. There's something seriously off about these two. And the longer Chris stays with Rose's family, the weirder things get.

As anyone who has seen the film's trailer could surmise, GET OUT is a bit of a riff on the seventies shocker THE STEPFORD WIVES. In that film, a patriarchal status quo threatened by feminism finds an insidious way to turn modern women into compliant housewives. GET OUT does kind of the same thing with race. But rather than go after the sort of overt racism you might expect, it instead pursues another tack that could best be described as "extreme cultural appropriation".

Peele's screenplay is smart and carefully plotted. He plants plot seeds that pay off later in a satisfying way, and his characters act believably. His direction isn't particularly flashy, but in the era of gratuitous fast editing and overdone color palettes, the meat and potatoes, solid storytelling approach he takes is refreshing. 4 out of 4 stars.
Posted by Bob Ignizio at 5:09 PM