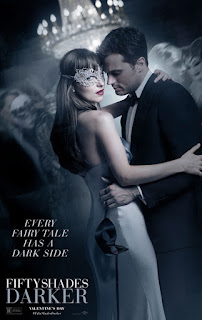 Picking up shortly after the end of FIFTY SHADES OF GREY, FIFTY SHADES DARKER finds Anastasia Steele (Dakota Johnson) starting work as personal assistant for book editor Jack Hyde (Eric Johnson) and trying to get on with her life after breaking up with kinky, damaged billionaire Christian Grey (Jamie Dornan). Anastasia had left Christian after realizing that his lifestyle of extreme S & M was not her cup of tea, and that he was so hardwired for that kind of sex that he could never be fulfilled by the "vanilla" relationship she wanted.

Christian desperately wants Anastasia back, though. So desperately that he believes his passion can overcome his sadistic inclinations. Anastasia wants Christian back, too, so they decide to give their romance another whirl.

Nothing wrong with that. It's not as if plot has ever been the point of erotica.

The problem is that FIFTY SHADES DARKER is a two-hour movie, and in between the film's sex scenes there's an awful lot of padding. A few subplots raise hopes that something interesting or dramatic might happen - one of Christian's previous submissives (Bella Heathcote) is stalking Anastasia, Anastasia's boss Jack is becoming sexually aggressive towards her, and the woman who taught Christian the ways of kink (Kim Basinger) objects to her pupil becoming involved with someone who isn't truly submissive – but these threads wind up either fizzling out or being left dangling for the next movie. That means most of the time they aren't getting it on, Christian and Anastasia are having insipid discussions about their relationship.

It certainly helps that the director this time around, James Foley (AFTER DARK MY SWEET, GLENGARRY GLEN ROSS), delivers a more stylish and polished film. There are still some unintentional laughs due to the screenplay and/or source material, but not nearly as many. Notably the sex scenes aren't part of the comedy this time around. If the only thing you care about is seeing Jamie Dornan and/or Dakota Johnson naked and engaged in various simulated sex acts both kinky and vanilla, and you don't mind sitting through long stretches of nothing much happening to get to those scenes, you probably won't be disappointed. To quote an old Saturday Night Live sketch in which Siskel and Ebert reviewed gay porn: "the sex is hot, and the production values are first rate." Just don't expect much more than that. 2 out of 4 stars.