Colin Hay: Waiting For My Real Life (now on video)

[COLIN HAY: WAITING FOR MY REAL LIFE is now available on home video.] 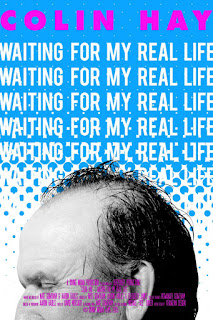 Some would say Colin Hay had his fifteen minutes of fame in the early ‘80s, when Men at Work ruled the airwaves…and presided over a 300K-strong crowd at the US Festival in San Bernardino. The Australian band’s 'Business As Usual' debut spent an unprecedented fifteen straight weeks at the top of Billboard’s album chart. Follow-up 'Cargo' peaked at #3.

So what if Men at Work had fizzled out by ’85? Surely the royalties from “Down Under” and “Who Can It Be Now?” promise Hay a secure retirement. Why not just walk off into the sunset satisfied with one’s “Brilliant Feat”? Isn’t the cover of ROLLING STONE enough anymore?

Not for Hay, whose undying creative impulse serves as the narrative thread of a new documentary exploring his tumultuous forty-year career. Directed by Aaron Faulls and Nate Gowtham (LEMMY, THE DAMNED: DON'T YOU WISH WE WERE DEAD?), COLIN HAY: WAITING FOR MY REAL LIFE revisits the meteoric rise of Men at Work, scrutinizes the band’s implosion, and celebrates—yes, celebrates—Hay’s struggle to develop and maintain a solo career.

But why bother doing it all again, given the work involved—and the apathy begotten?

“There is no final ‘Boom, you’ve done it!’” explains New Found Glory guitarist Chad Gilbert, one of the film’s many featured musician / actor guest interviewees.

“You wake up with the same needs you had back in the garage. There is no finish line.”

Unfortunately, it took the Men at Work front man a quarter-century (and a nasty bout with the bottle) to realize for himself that an artist’s urge never quiets, and that the hunger for the positive biofeedback shared with a receptive audience can’t be sated offstage.

“Colin’s a craftsman,” declares troubadour Chris Trapper. “You can’t just stay home. If you’re good at something, you go out and you do it.”

Hay’s been good at it since childhood. Raised by music shop proprietors in Glasgow, Scotland, the teenage bronchial asthmatic built upon his love for The Beatles after migrating to Melbourne with his family in 1967.

“Melbourne was warm. Everyone was outside in shorts and flip-flops. There was less social entrenchment, less religious division.”

Ex-managers (Russell Deppeler) and record producers (Peter Karpin) chime in on the Men’s red-hot trajectory, augmenting Hay’s own tale (most of it told while standing in his kitchen) with memories of how BUSINESS created “spotfires” of interest around the globe—but took a long time to break in the United States.

“They rejected it twice,” says Colin.

But then Men at Work secured an opening slot on tour with Fleetwood Mac…and newly-christened MTV put the charmingly quirky promo videos for “Who Can It Be Now?” and “Down Under” into heavy rotation.

“We could do no wrong,” says Speiser of the group’s “sudden” fame.

Carol Hay remembers receiving a new Alpha from her rock star brother. Test-driving the vehicle, she had to pull over when one of Colin’s songs came on the radio.

Sophomore effort CARGO yielded additional hits in “Overkill” and “It’s a Mistake.” But Hay and his former handlers surmise that the 1983 release arrived too soon, its ripples overlapping with BUSINESS in the States. Pressured to duplicate his earlier triumphs, Hay wanted to walk away from it all.

Instead, Speiser and Rees were fired. Strykert quit.

The film’s second act reassesses Hay’s initial attempts to fly solo (only to be dropped by MCA after two commercially lukewarm discs), details his battle with alcoholism, and chronicles his metamorphosis as an “unplugged” phenomenon in L.A.

“You’re the same man, have the same talents…but suddenly no one cares.”

Cameos on Braff’s popular doctor dramedy help Hay cultivate younger fans that never heard of Men at Work (or never made the connection to “Down Under”), and inclusion on the soundtrack to Braff’s directorial debut GARDEN STATE in 2004 put moviegoers on notice that this middle-aged singing Scotsman warranted further investigation. Colin cuts a string of well-regarded discs (on his own label before signing with Compass, who issue 'Man @ Work' (2004), 'Are You Lookin’ At Me?' (2007), 'American Sunshine' (2009), and 'Gathering Mercury' (2012).

Faulls and Gowtham also examine other impediments in Colin’s path: Hay is sued by a music publisher who claims Ham misappropriated their children’s song for the familiar flute riff in “Down Under.” Litigation-related stress eats at the musicians, particularly Ham—who suffers a fatal heart attack—and knocks Hay’s “heroic” father off his perch. The cameras also capture a bit of life on the road, where busted pipes and backstage doors confound Colin and soundman Ace Baker, SPINAL TAP-style.

“The last decade was all hand-to-hand combat,” Hay says of his man-in-the-trench touring M.O.

“I nearly pissed myself laughing,” says Jackman about a Hay gig in Melbourne.

The rockumentary is crammed with archival Men at Work / Colin concert clips, video vignettes, and TV appearances, features plenty of live footage from recent shows in Boston, Roanoke, Atlanta, and elsewhere, and makes effective use of songs like “Be Good, Johnny,” “Maria,” “I Can See It In Your Eyes,” “Highwire,” “Beautiful World,” “Freedom Calling,” “Prison Time,” and autobiographical “Waiting for My Real Life To Begin” (from whence the film takes its name).

Hay’s underdog / salvation story is compelling in and of itself, a la the musical odysseys depicted in ANVIL! THE STORY OF ANVIL, JACO, and WHO IS HARRY NILSSON? But Faulls and Gowtham’s edits are choice, and their awareness of the subtleties of body language masterful. For example, when discussing her brother’s drinking days, Carol Hay casts her eyes downward and runs a hand over her forehead. And when Hay himself wraps his Men at Work breakup story, he unexpectedly retreats from his kitchen counter and turns away.

The directors could have stopped rolling or cut away when the talking ended, but those silent little gestures are often louder and more telling than spoken word. 3 out of 4 stars.

COLIN HAY: WAITING FOR MY REAL LIFE is available for streaming on iTunes and Amazon.