Charity preview of Dying Laughing, the stand-up comedy documentary, Feb. 12 at 7 p.m. at Hilarities in Cleveland 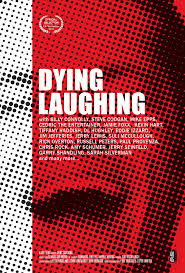 Watch some recent documentaries about stand-up comedy - especially COMEDIAN and I AM COMIC - and the takeaway is that comics are miserable neurotics from ghastly families with tortured outlooks. So much so that Lewis Black, in I AM COMIC, takes to carrying an oversized lollipop to remind people that, hey, isn't all this supposed to be about being funny?

DYING LAUGHING is the title of the latest nonfiction feature that probes the psyches of big-name comics, especiallyi with tales of being on the road on grueling tour circuits. How do these miserable bastards do it every night?

The evening screening at a genuine Cleveland comedy club - Hilarities, in Pickwick & Frolic downtown, 2035 E. 4th St., is most appropriate. Half of the ticket price - $10 -  stated to be going to cystic fibrosis fundraising, a tribute to the late Shandling, who supported that cause.

(Other half ought to go to mental health, just saying).

Posted by Charles Cassady Jr. at 9:29 AM