[UNDER THE SHADOW screens Thursday January 5th at 6:45 pm and Friday January 6th at 9:30 pm at the Cleveland Cinematheque and is available on VOD.] 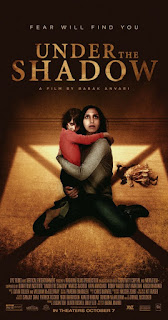 The Iran/Iraq war provides the backdrop for supernatural menace and cultural commentary in UNDER THE SHADOW, the debut feature from writer/director Babak Anvari. The film centers on Shideh (Narges Rashidi), a former medical student with very Western ideas trying to get by in post-cultural revolution Tehran. Shideh is unable to return to school due to past associations with a leftist group, and her husband Iraj (Bobby Naderi), himself a practicing doctor, isn't particularly sympathetic. He essentially says she brought it on herself, and besides, she should have plenty to keep her busy taking care of the couple's daughter Dorsa (Avin Manshadi).

Heaping further stress and strain on the situation is the escalation of the war, with Iraq now launching missiles at its neighbor. Iraj thinks the family should go into the country and stay with his parents, especially once he finds himself called into active military duty. Shideh, however, doesn't want to go. It's not explicitly stated, but one gets the sense that whatever remaining autonomy Shideh has would be taken away if she went to live with the in-laws.

Even after her apartment building is hit by a bomb (which, thankfully, doesn't explode), Shideh refuses to leave. At the same time, Dorsa begins acting out, especially when she loses her favorite doll. A neighbor blames supernatural entities known as djinn for all the bad luck, which the college educated Shideh dismisses. But as the shelling goes on and her self-confidence wanes, the idea begins to take hold in Shideh's mind, as well as that of her daughter, who claims one of the evil spirits is responsible for taking her doll.

As a book Shideh reads about the Djinn says, "where there is fear and anxiety, the winds blow," the winds referring to the Djinn. Shideh has plenty of fear and anxiety to go around, and while the film ever try to convince us the Djinn are simply in the mind of its protagonist, it's fair to say thematically they represent Shideh's inner turmoil. This "less is more" approach to horror recalls the classic films of Val Lewton, as well as more recent films such as THE BABADOOK.

In many ways it's a familiar story. What makes UNDER THE SHADOW stand out is the way it uses its thrills and chills to comment on the fundamentalist Islamic regime its protagonist lives under. Anvari may have come from Iran, but no way could he have made this film there (it's a UK/Qatar/Jordan co-production). As effective as the film's depictions of the supernatural are, one can dismiss the Djinn as mere folklore. But when Shideh makes the mistake of venturing outside without her hijab after being scared half to death, only to be threatened with lashes by the authorities? That kind of scary is very much grounded in reality. 3 ½ out of 4 stars.
Posted by Bob Ignizio at 12:00 AM