The Devil Lives Here (now on home video and VOD)

[THE DEVIL LIVES HERE is available on DVD and VOD] 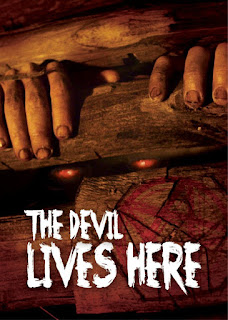 Some movies have one pivotal moment that can sadly derail an otherwise excellent film -- that scene where it sinks so deeply into a tarpit of silliness that there is almost no way to pull itself out. THE DEVIL LIVES HERE is exactly such a film, and it's aggravating because it's really well made, absorbing, and fun to watch.

A well-worn but proven premise, a group of attractive young people take a roadtrip to visit a friend in an isolated and supposedly "haunted" farm house. They play charades and tell ghost tales, while scenes of an asshole farm owner/bee keeper - who routinely tortures, rapes, and kills the slaves who work for him - are intercut.

Plotwise, there is nothing incredibly inventive here, but most of the film's technical elements are so skillful that it rises above what could be middling material. Kaue Zilli's cinematography illustrates an elegant use of focus, framing, and lighting, the last of which frequently mimics sunlight or fire, creating a warm, often undulating color scheme, reminiscent of hellfire.

Rafael Baliu's script, based on a Brazilian urban legend, certainly has its merits too, deftly mixing the supernatural, mental illness, and home invasion horror subgenres. However, he may also be to blame for the one particular plot point where the film takes a left turn and most of the character's motives don't seem to follow logic anymore.

It all starts with a weird and completely unbelievable sex scene just before the climax.

Two characters are actively being hunted in their vacation home by humans and ghouls alike, and they decide to stop trying to escape so they can have a quick fuck. These two are moaning and howling like it's the Second Coming. They don't even bother trying to be quiet. Apparently, when someone tells you they love you, it's enough to make you completely exit “flight or fight” mode and just start boning.

Perhaps had they established that the spirits or the house were influencing them earlier in the film, it might have been easier to buy, but it just comes off as clumsy, kind of cheap writing.

Sadly, this sex scene has to happen for the ending to work out the way it does.

There is a clever concept in there somewhere, but it's just so sloppy in trying to get where it wants to go that the audience doesn't really care by the time it gets there.

First time feature directors Rodrigo Gasparini and Dante Vescio say this will be the first part of a larger project with producer M.M. Izidoro called URBANIA, which will examine several of Brazil's folktales and urban legends.

Smartly concise and beautiful to look at, THE DEVIL LIVES HERE is a stylish, highly entertaining film for the first hour, enough so that it will be exciting to see these filmmakers grow in future installments. But this film's ending relies so heavily on that one lame-brained moment that it almost tanks the whole thing.
2 out of 4 stars
Posted by Unknown at 11:45 AM