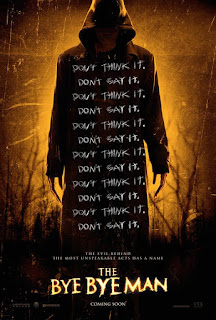 A trio of college students move into a creepy old house together. Shortly after taking up residence, they find themselves terrorized by a paranormal force that causes hallucinations and, eventually, leads to violence.

Elliot (Douglas Smith) and Sasha (Cressida Bonas) are an item. John (Lucien Laviscount) is Elliot's best friend, and possibly carries a torch for Sasha, as well. After settling in to their rented digs, they discover a nightstand that has strange writing inside its drawer – "Don't think it, don't say it" is scrawled over and over again. Beneath the contact paper with this cryptic writing, which Elliot of course peels off, the drawer reads "The Bye Bye Man".

Sasha's psychic friend Kim (Jena Kanell) warns about the supernatural danger the characters are in, but Elliot laughs it off. Not for long, though, as the titular menace (Doug Jones) soon starts playing head games with Elliot and his friends, eventually leading to murder and mayhem.

There's a hardnosed police detective (Carrie-Anne Moss) who knows something strange is afoot but can't quite suss out what it is. And there's an aged, reclusive survivor of the original incident (Faye Dunaway) who Elliot goes to visit to fill in the backstory. Really, pretty much every other stock character and trope you'd expect is here. About all that's missing is a "Crazy Ralph" type to tell the kid's they're doomed.

Having grown up a horror fan in the eighties, I tend to go a bit easier on teen horror than your average critic. Sure, these kind of movies are garbage. But sometimes, for me, at least, garbage can be entertaining.

And so it is with director Stacy Title's THE BYE BYE MAN. The film is based on a supposedly true ghost story as published in the book 'The President's Vampire' by  Robert Damon Schneck. I have no idea how much liberty Title's husband and occasional collaborator, Jonathan Penner took with the source material, but true or not the film feels like a mash up of FINAL DESTINATION, A NIGHTMARE ON ELM STREET, and THE RING. There are also similarities to other well known urban legends like "Bloody Mary", as well as those of a more modern variety peddled by the website Creepy Pasta. The Bye Bye Man would be right at home with such Pasta favorites as Slender Man and Eyeless Jack.

THE BYE BYE MAN is not a good movie, but part of me was just happy to see an attempt at creating a new horror icon in the vein of Freddy, Jason, Michael, Chucky, et al. And I always enjoy seeing films shot in northeast Ohio (Berea, which the film tries to pass off as a small town in Wisconsin). I can't recommend anyone actually go see the movie, but personally I got enough nostalgic pleasure from this bit of schlock to feel as if I got my money's worth. 2 1/2 out of 4 stars.