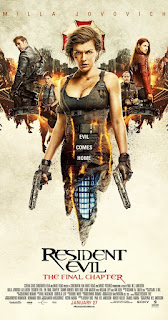 Sometimes even a dumb movie can tap into the spirit of the times. And when it comes to dumb movies, few have been dumber than those in the RESIDENT EVIL series. Don't get me wrong; I've enjoyed most of them, but they've hardly been works of cinematic art. That said, both the games they are based on and the films themselves have, from the get-go, had an anti-corporate, anti-establishment subtext. And maybe it's just the swirl of current events coloring my perceptions, but it seems as if RESIDENT EVIL: THE FINAL CHAPTER really plays that angle up.

How so? Well, one could very easily sum up the plot as, "nasty women Alice (series star Milla Jovovich) and Claire (Ali Larter) battle an evil patriarchy represented by the (literally) twin forces of religious extremism and corporate greed, both played by Iain Glen, and their armies of mindless zombie hordes. There's also an older woman with ties to Alice who once represented a great hope for humanity as a child, but later in life sold out to corporate interests.

Reading too much into it? Maybe. But I paid my money to be entertained, and I find that interpretation very entertaining at this moment in time.

Of course there's nothing wrong with just taking this trash on its surface level if you prefer. The trademark monsters and mayhem the franchise is known for are on ample display, and if you've actually been paying attention to series continuity, this offers a satisfying conclusion. Of course, the door is still left open for a potential sequel. And if this makes enough money, there's no reason to expect it to really be the final chapter any more than FRIDAY THE 13TH PART IV: THE FINAL CHAPTER or FREDDY'S DEAD were the end for their respective franchises.

Like all but the second film in the series, FINAL CHAPTER was written, produced, and directed by Paul W.S. Anderson (or Mr. Jovovich, if you prefer). Anderson is no critical darling like his BOOGIE NIGHTS directing namesake, but in my book the guy makes entertaining schlock. That's what he delivers here, once again.

Any critic with a mind to, myself included, could easily pick apart all the various flaws in the film. The plot is convoluted, bordering on the incoherent at times. The action scenes are shot in the annoying fast cut style that for some inexplicable reason continues to be popular in modern action movies. And although there are some capable actors in the cast, it's not as if they're tasked with anything that might show their range or talent.

We're not making MANCHESTER BY THE SEA here, though. This is a big, dumb action/horror movie. It's not good, but it will satisfy its target audience, of which I guess I 'm one. And having somewhat overdosed on more serious fare this week as I try to get caught up in time for the Oscars, not to mention my unease and disgust with the current political situation, this was just the movie I needed. 2 ½ out of 4 stars.
Posted by Bob Ignizio at 2:06 PM