Repost: Christine (January 5th and 6th at the Cleveland Cinematheque) 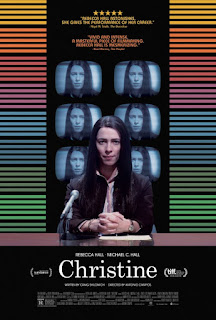 A few weeks ago, a film called KATE PLAYS CHRISTINE screened at the Cleveland Cinematheque. It was not-quite-a-documentary about an actress doing research to play the role of Christine Chubbuck, a Florida newscaster who killed herself on the air, in a (fake) dramatized film. While that film was rough around the edges, it made a strong statement on its subject, implicating both the filmmakers and us, the viewers, in exactly the sort of sensationalistic voyeurism its subject railed against just before pulling the trigger.

Now comes CHRISTINE, a more traditional docudrama based on the same events. It stars Rebecca Hall as the title character, and she does an exceptional job of portraying her subject. From what surviving footage I've seen of the real life Chubbuck in KATE PLAYS CHRISTINE, Hall nails both the appearance and mannerisms of the real life Christine. More importantly, though, she gives the character life and depth, showing us a deeply depressed woman who is both sympathetic and difficult to like. Since the film is largely a character study, to a great degree it is the power of this performance that makes it worth watching.

The film also does a good job depicting the early seventies. This isn't the flashy disco era seventies we usually see on film, but the dreary hangover from the sixties. Free love and bellbottoms are no longer in vogue, having been replaced by quack self-actualization movements like the "transactional analysis" group Christine's crush George (Michael C. Hall) takes her to.  Psychedelic rock has been replaced by easy listening light rock like John Denver, a favorite of Christine's, at least in the movie.And while the woman's movement is making inroads to the mainstream, it's not without resistance, as when Christine's boss criticizes her by saying, "You know what your problem is? You're a feminist."

The direction by Antonio Campos is solid. Straightforward, but with just enough edginess to it to avoid that "made for TV" feel. But while CHRISTINE does grapple with some serious issues regarding depression and the difficulties women faced both personally and professionally at the time, it doesn't pack quite the same punch as KATE PLAYS CHRISTINE. It's not without impact, but it also lets the audience off the hook in a way that KATE PLAYS CHRISTINE does not. 2 ½ out of 4 stars.
Posted by Bob Ignizio at 12:00 AM