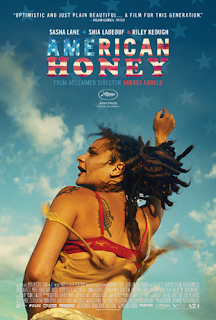 There's an interesting story to be told about a young woman living in poverty who leaves an unhealthy home environment to seek her fortune on the road selling magazines. Unfortunately, AMERICAN HONEY isn't it.

The film introduces us to its protagonist, Star (Sasha Lane) as she and her siblings are dumpster diving at a grocery store. As they prepare to head home, a van full of energetic, playful young people pulls in to the parking lot. One of them, Jake (Shia LeBouf), immediately catches Sasha's eye. So she and the kids follow the group into the store. When Rhianna's "We Found Love" comes on over the store's speakers, the group breaks into an impromptu dance party and gets thrown out. In the scuffle Jake loses his cell phone, which Star quickly snatches up.

Back in the parking lot, Star returns the phone to Jake, using her good deed as an icebreaker. She learns that the group are magazine salespeople. They drive across the country and go door to door, selling their product. Jake offers Star a place on the crew, but she turns him down.

Since home life is pretty awful – not just the poverty, but the man of the house (possibly Star's father, it's not clear) sexually abuses her – Star eventually reconsiders Jake's offer. After dropping her siblings off with their mother, she meets up with the Jake and the gang at their hotel, and embarks on a great American road trip of discovery and ethically dubious sales work.

Writer/director Andrea Arnold's AMERICAN HONEY strains hard for realism and authenticity. Its style at times recalls the films of French brothers Jean-Pierre and Luc Dardenne (THE CHILD, KID WITH A BIKD). But there are far too many moments that strain credulity. Not in the exaggerated, full-blown fantasy manner of a Schwarzenegger action film or mega budget sci-fi flick – when a movie is serving a heaping helping of nonsense, and makes no pretentions to anything other than that, it's easy to suspend disbelief. But AMERICAN HONEY is unbelievable in more mundane ways, and in its depiction of relationships and actions that are supposed to involve ordinary people in an ordinary world, it hits numerous false notes.

Most damaging to the film is the central romance between Star and Jake. There is no chemistry between these two, and no compelling reason for why either of them should be attracted to the other besides the obvious physical ones. But their relationship is treated as something more than that, and it's not convincing for even a second.

But beyond that, even in depicting its world of poor young people selling magazines door to door, the film never sells us on the truth of what we're seeing. On her first time out, working with Jake as her teacher, we see Star flat out try to sabotage him. It might be out of petty jealousy over the customer's underage daughter, who seems to have taken a shine to Jake, or because the customer herself is "insulting". But either way, it doesn't ring true.

Later in the film there's a scene where Star goes off on her own and scores a particularly big sale from some wealthy businessmen.  Jake then comes riding in to her "rescue" in over the top fashion. Really? Perhaps something like that could happen, but it seems more like a scene that belongs in a movie less interested in being grounded than this one does.

Further keeping viewers at arm's length are the film's indie affectations: the shaky, at times out of focus camerawork, the random lingering shots of insects, the gratuitous pot smoking, the casual nudity and frank but unconvincing sex scenes, and of course, to cap it all off, a scene involving sparklers and fireworks. And then there's the Oscar bait length of the thing. There isn't even close to 2 hours and 40 minutes' worth of movie here, but that doesn't stop director Arnold from dragging it out that long.

On the more positive side, star Sasha Lane is fantastic in her first acting role. She has that natural, unaffected quality that can only come from a non-actor who just happens to have innate talent. The same cannot be said of her co-star. Shia Lebouf is full-on method acting here. He's fine in more casual scenes, but when his character's emotions move to anger or jealousy, watch out for pieces of flying, chewed up scenery. The only other cast member with any kind of substantial role is Riley Keough. She's fine, but isn't really given much to do other than look sexy and be a one-dimensional mean girl. Everyone else in the magazine crew is more a glorified extra than an fully fleshed out character.

The film won the Prix du Jury at Cannes this year, and critical response in general has been far more favorable than mine, so take that how you will. I can only report on my personal experience, and for me watching this movie was a slog. And I feel really bad saying that, as there are so few films that focus on a female character to the degree this one does. And dammit, Star isn't an inherently bad character. She just deserved a better movie. Given the quality of her performance here, however, Sasha Lane will have no shortage of other opportunities to be in better films, should she want them. 2 out of 4 stars.
Posted by Bob Ignizio at 12:00 AM