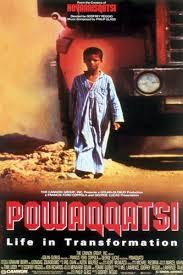 This 1988 nonfiction feature was second installment of director Godfrey Reggio's `qatsi' trilogy, preceded by KOYAANISQATSI and followed many years later by NAQOYQATSI. This one is arguably the most accessible, beneath the symbolism and MONDO CANE-style juxtaposition of luxury and Third World poverty.

Hopi-speakers shall no doubt recognize the title as translating as "life in transformation," and theme is reflected in scenes shot in developing nations around the world, where women, children and laborers, along roadsides and in mud ditches, toil to subsist and build.

Meanwhile gleaming skyscrapers and concrete highway overpasses rise in the background, but it is uncertain whether any of the ragged low-caste peasants here will ultimately benefit from the high technology and globalization, or just end up being but bricks in the retention-wall.

The poor in their native communities at least seem happy; the ones dwelling in tin-roofed shanty slums in the cities, are trampled and miserable, amidst the splendor and largesse of `civilization.' Brilliant-hued cinematography, often in slow-motion, is once again matched to a Philip Glass score. If not for the precedent set by KOYAANISQATSI going over some of the same ground, this would likely have been just as grounddbreaking. As it is, the material seems a little on the familiar side, though nonetheless often breathtaking. (3 1/2 out of 4 stars)