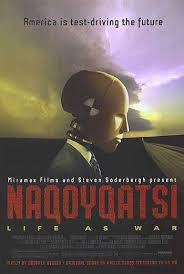 It took almost as long for the second set of Star Wars theatrical features to appear as it did for Godfrey Reggio to come up with the finale in the trilogy that KOYAANISQATSI started in 1983. The good news...No Jar Jar Binks.

But the insipid all-CGI space creature would fit right in, however.

The title of this non-narrative would-be mind blast translates as "war as a way of life," which made for great ad copy in the post-9/11 era but seems only tangentially related to the subject material, which is the rise of a digital age and a computer-linked world economy/culture, replacing the natural/physical world of the earlier two features.

Much of the film is, in fact, virtual, rendering pixel-created soldiers, pop idols, lovers, landscapes, and moving windows and frames of alternating elements. Corporate logos like Levi and Coca Cola and the symbols of the world's great religions alternate with each other (get it, huh, get it, huh?).

Political leaders appear in slow, pan portraits of their spooky simulacra, and humanity is reborn, a la 2001: A SPACE ODYSSEY, as a happy baby, the `MassMan,' according to press notes, web-linked to everything.

All very nice, but the lack of a human element leaves the production feeling more like the world's longest screen-saver than anything else, something that a clever solo production-house filmmaker might well have done on his home PC. One misses the days when Reggio's crews would take the cine cameras out and image genuine superhighways instead of the information one. Soundtrack artists include Philip Glass and Yo Yo Ma. (2 3/4 out of 4 stars)