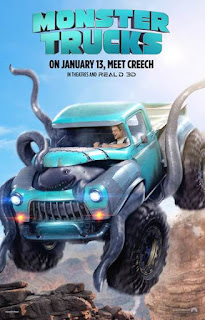 When a movie's title doubles as its plot synopsis, you know you're not dealing with Oscar caliber material. And so it is with MONSTER TRUCKS, from director Chris Wedge (ICE AGE, EPIC) and screenwriter Derek Connolly (JURASSIC WORLD, SAFETY NOT GUARANTEED).

It's a movie about subterranean creatures who get pulled to the surface by a dastardly, greedy oil company. 2 of the creatures are captured, but a third gets away and, before long, has taken up residence in the old pick-up truck belonging to bad boy high school student Tripp Cooley (Lucas Till), who looks like the love child of Patrick Swayze and Kurt Russell.

After some initial freaking out about, you know, a giant monster living in his truck, Tripp befriends the beast and, along with his cute but uptight tutor Meredith (Jane Levy).

Of course the oil company wants to get their hands on this creature, too, so they can keep on drilling without having to worry about some hippie liberal making them stop just because they've discovered a new, extremely rare lifeform. The main bad guy is Reece Tenneson (Rob Lowe), but he sends his flunky Burke (Holt McCallany) to do his dirty work and has his chief scientist Dr. Bill Dowd (Thomas Lennon) come up with the sort of lies that will get the company good with government regulators.

Basically what we have here is a cross between HERBIE THE LOVE BUG and HARRY AND THE HENDERSONS with a simplistic environmental/anti corporate message tacked on. Fine by me, but those who lean toward the conservative/drill, baby, drill side probably won't like it.

But whether one cares for the message or not, one thing grown-up viewers of all political persuasions should be able to agree on is this: the movie is dumber than a bag of hammers. It's nothing more than a lot of contrived plotting and seventies style car chases that result in considerable property damage that everyone just seems to brush off.

As for the kids, the message may or may not get through, but they'll probably enjoy the ridiculous stunts and the cute monster. Certainly my soon to be six year old did, loudly  voicing his approval several times during the course of the film. And since the movie was clearly made more for him than for me, his response is probably the one you should pay attention to if you were planning on taking your kids to see this.

And if you're an adult without kids who was planning on seeing this yourself – come on, man, you're an adult. I know it's January and most of the movies are either stuffy Oscar bait or crap the studios are dumping, but there are better films for you to spend your money on. 2 out of 4 stars.
Posted by Bob Ignizio at 12:01 AM