Mifune: The Last Samurai (February 2nd and 4th at the Cleveland Cinematheque)


[MIFUNE: THE LAST SAMURAI screens Thursday February 2nd at 6:30 pm and Saturday February 4th at 9:15 pm at the Cleveland Cinematheque.] 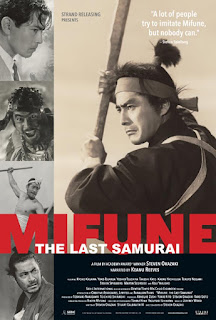 Known primarily for his roles in Akira Kurosawa's classic films SEVEN SAMURAI, YOJIMBO, and RASHOMON, Toshiro Mifune was one of the most iconic movie stars of all time. He had a larger than life presence, yet his performances often contained great subtleties as well. Hoping to follow in his father's footsteps as a photographer, his plans were derailed by World War II. He served in his country's military, where he often ran into trouble with his superiors. When he later found fame and fortune as an actor, he displayed a love of fast cars and hard drink, all too often mixing those passions with disastrous results.. You would think the life of a guy like this would make for an interesting documentary.

And maybe it would. Unfortunately, MIFUNE: THE LAST SAMURAI isn't that film. And perhaps that film can't be made. For starters, Mifune is dead (he passed away in 1997). So is Akira Kurosawa, the director he is most associated with. Also no longer with us is Mifune's wife. And either these people simply didn't do television or radio interviews, or the makers of THE LAST SAMURAI were unable to get permission to include any such materials in their film.

The result of these omissions is a documentary that paints a rather thin, surface portrait of its subject. The film doesn't quite hit the 90 minute mark, and still feels like it's doing whatever it can to pad itself out just to get there (about 6 minutes are spent on talking about the Japanese film industry prior to Mifune's involvement alone).

We do hear some entertaining anecdotes from surviving co-workers of Mifune's, and Mifune's son gives at least a hint of what his father was like. In the end, though, one doesn't leave the film feeling they know much more about its subject than they did when it began.

As far as Mifune's acting career, MIFUNE: THE LAST SAMURAI gives a fair amount of time to the Kurosawa films, but this is a man who starred in literally hundreds of movies and TV shows. Even the SAMURAI trilogy, his best known and most well regarded work for a director other than Kurosawa, is given short shrift.

While it's not completely without merit, in the end MIFUNE: THE LAST SAMURAI just doesn't have enough depth or substance to serve as a definitive portrait. The best one can say of it is that it might be enough to interest some new viewers to check out Mifune's films. But fans hoping for a comprehensive look at the actor's life will probably find THE LAST SAMURAI lacking. 2 ½ out of 4 stars.
Posted by Bob Ignizio at 12:00 AM