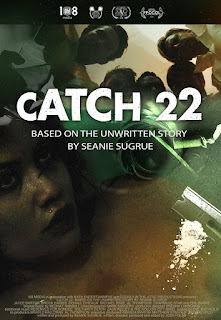 
CATCH 22: BASED ON THE UNWRITTEN STORY BY SEANIE SUGRUE, back to the motherland for its Oberlin premiere at the historic Apollo Theatre for a MIDNIGHT GRINDHOUSE SHOWING on Friday, January 27th.


The fucked up story goes something like this: "With Hurricane Sandy looming on the horizon, five hard-lived friends come to a send-off celebration alongside an unexplained dead girl. What are friends for?"


Folan will be in town hosting a CORPSE REVIVER preparty at the nearby watering hole, The Feve (30 S. Main St, in Oberlin) from 9:30 PM until leading a pilgrammage around the corner to the theatre at 11:30ish. There will be drink specials and debauchery, hopefully at least most of the attendees make it to the movie afterwards.

There's no cover for the CORPSE REVIVER preparty, and tickets to the movie are available through Cleveland Cinemas @: