Koyaanisqatsi (January 27 at 7:30 pm and January 28 at 11 am at the Cleveland Cinematheque)

[KOYAANISQATSI screens Friday January 27th at 7:30 pm and Saturday January 28th at 11:00 am at the Cleveland Cinematheque.] 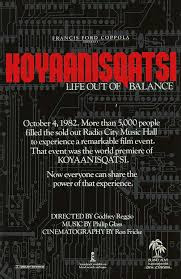 "Koyaani-what?!" The title means "life out of balance" in Hopi, and life's balance (or the need for it) is at the core of this impressive, if slow-moving and resolutely non-linear 1983 nonfiction film by Godfrey Reggio, which got a high-profile boost from Francis Ford Coppola in its initial release.

There's no story as such, zilch narration and no characters, unless you count buildings and mountains and one memorably tumbling piece of aerospace hardware.

The film begins with a series of peaceful natural scenes reminiscent of a New Age meditation video. We then move into the unnatural world man has created, beginning with a mining camp -- humanity's rape of the environment. The pace (and the powerful musical score by famed experimental composer Philip Glass) gets increasingly hurried and chaotic as we are shown cities with almost-psychedelic footage of traffic head- and tail-lights whizzing by at night, buildings undergoing demolition, etc.

The final message seems to be that man's urbanization of the world creates a moral and spiritual sickness that needs to be addressed with a return to natural harmony. A good deal of confirmed city-dwellers won't unconditionally sympathize with Reggio's pastoral vision, and you could argue that it's hypocritical to slam
technology without which a work like KOYAANISQATSI could not have been made.

But the film has its admirers, one website hailing it as "the greatest film ever made." Certainly its imagery and Glass' soundtrack will endure long after more conventional flicks have faded from view. Glass performed the music live in a few elite Lincoln Center screenings. Reggio, again in association with the composer and co-cinematographer Ron Fricke, subsequently made POWAQQATSI and NAQOYQATSI, much along the same lofty head-trip lines. (4 out of 4 stars)
Posted by Charles Cassady Jr. at 1:32 AM