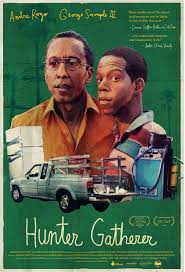 There isn't much in the way of plot in HUNTER GATHERER. It's more of a "hang out" film, in which we tag along with eccentric ex-con Ashley (Andre Royo) as he goes through his day to day life in inner city America. But this isn't the usual inner city film that revolves around drugs and/or crime and/or violence. It's a lighthearted character study, mainly of Ashley, but also of the various other quirky characters who find themselves in Ashley's sphere.

Chief among these other characters is Jeremy (George Sample III), a young man recruited into being Ashley's friend and partner whether he likes it or not. Jeremy works as a human guinea pig. His most recent gig involves wearing multiple, rubbery patches in order to determine what, if any, side effects they might have.

After a chance encounter, Jeremy joins with Ashley in a scheme to dispose of refrigerators. Rather than pay the $100 disposal fee the local dump charges, Ashely offers to get rid of the appliances for $75, using Jeremy's truck to take them to a different dump where disposal is free. But Jeremy's truck has engine trouble, so the refrigerators have to be stored at Asheley's mom's house in the meantime.

When he's not moving large broken appliances from one place to another, Ashley is trying to win back his ex-girlfriend Linda (Ashley Wilkerson). To this end, he's taking a class in writing cursive so he can write a fancy love letter. But Ashely is also hedging his bets, making time with Jeremy's Aunt Nat (Kellee Stewart). At least he's up front with her that he still carries a torch for Linda, and truth be told if anyone is going to get hurt by Ashely's two-timing ways, it's probably going to be Ashely.

Writer/director Joshua Locy tries a few artsy flourishes here and there which don't add anything to the film, but don't hurt it too badly, either.The film eventually tries to give Ashely a big moment of redemption or something of that kind, but it feels forced. The coda that follows, however, is more in keeping with the film's tone.


For the most part, as long as you enjoy the company of these characters and don't expect any great point to be made, watching HUNTER GATHERER is a warm, pleasant experience not unlike watching an early Jim Jarmusch film. Being a huge fan of Royo's, whose portrayal of junkie informant "Bubbles" on HBO's 'The Wire' was, for me, the heart and soul of that show, I certainly didn't mind spending 90 minutes with the actor as he created another memorable character. 3 out of 4 stars.
Posted by Bob Ignizio at 12:00 AM