Evolution (January 28th and 29th at the Cleveland Cinematheque) 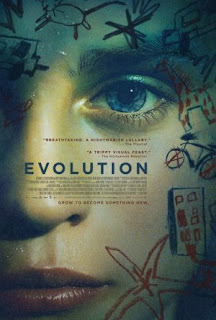 The French have a term: fantastique. It refers to a genre where horror, science fiction, and fantasy intersect. A genre in which the outré intrudes into an otherwise grounded, realistic narrative, generally without explanation. That quite nicely describes the general tenor and tone of Lucile Hadžihalilović's film EVOLUTION.

From the start, the viewer is simply dropped into the film's bizarre world and asked to accept what they see at face value, just as the characters do. What that entails is a small seaside village where a young boy, Nicolas (Max Brebant), is shocked to discover the body of a boy with a red starfish on his stomach while swimming in the ocean. His mother (Julie-Marie Parmentier) tries to reassure Nicolas that there was no body, only the starfish. But later, we see her bring the corpse to a mysterious cabal of women at night.

There are hints that we are in some sort of dystopian future – the unappetizing food the characters eat, the uniform-like clothes, the fact that all the males in town appear to be about twelve or thirteen, all the women in their twenties, and the dilapidated seaside village where the characters live. But whatever disaster has taken place, we are not informed of it.

Whatever has happened, it seems to have had a profound effect on the process of reproduction. There are also some Lovecraftian undertones, with intimations that humans may have interbred with strange creatures from the sea.

Interpretations can certainly be drawn from the film and argued over, but exactly which is the "right" one seems irrelevant. It's not that Hadžihalilović is being willfully confounding; but she certainly isn't spoon-feeding viewers anything here, either.

It would not be unfair to draw comparisons with David Cronenberg's films, especially his early exercises in "body horror". However, I would argue that EVOLUTION owes far more to the works of Hadžihalilović's countryman, Jean Rollin.

Most notably, Hadžihalilović and Rollin share a visual style that can be described as poetic. There's also the seaside setting, a recurring motif in Rollin's films. The sparseness of dialogue. And at the film's core, the theme of what some view as horrific being, in fact, the next step in human development. That idea runs through most of Rollin's works, but in the context of this film I was reminded most of LIPS OF BLOOD and NIGHT OF THE HUNTED.

Make no mistake, though. Ms. Hadžihalilović proves herself to be a distinctive filmmaker in her own right with EVOLUTION.  While her themes may share similarities to those of other auteurs, her take on them is unique. She eschews the more overtly dreamlike visuals of Rollin and the visceral violence of Cronenberg, but displays a style of her own that is no less compelling. 3 1/2 out of 4 stars.