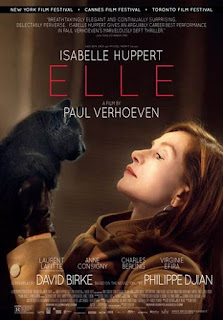 ELLE, a French-language film directed by Paul Verhoeven, arrives at a strange moment, when the “normalization” — a leading candidate for 2016 word of the year — of sexual assault and brutality grew out of a vitriolic presidential election. So a film in which the victim of a violent rape falls for her attacker and invites him to rape her again might not prompt audiences to walk out in disgust, but could actually inspire some to embrace it in defiance of “political correctness.”

As it happens, the film has inspired fulsome praise from critics: “riotously funny”; “”a lighthearted rape-revenge story”; “audacious, generous film”; “tastefully twisted mid-to-late-life crisis thriller that's both lasciviously dark and rebelliously light on its feet” “Hardly skimps on the sex, violence and sadism, yet ultimately tells a story about how one woman uses them all to set herself free”; “will draw ire from feminists and others, but it's one of the bravest, most honest and inspiring examinations of the subject ever put onscreen.”

The Dutch-born Verhoeven has an impressive ability to inhabit the cultures in which his films are made. He mastered a brand of mainstream Hollywood action, and with Elle, has finessed a very French film, even though he did not initially speak the language.

Uncomfortable narrative aside, Elle is a well made film, graced with Isabelle Huppert as its star, beautiful and strong at 63. She plays Michèle Leblanc, the powerful head of a video-game development company. The film opens in the midst of her brutal rape by a masked intruder, as her cat looks on with passive interest. The attack is brutal, but when it is over, Michéle dusts herself off, sweeps up the broken crockery, bathes the blood off her body, orders sushi by phone and proceeds as if nothing happened. “I fell off my bike,” she explains to her son, Vincent (Jonas Bloquet), who is not convinced.

Why didn't she call the police? Michèle has a tortured history with law enforcement. We learn that her father was a notorious mass murderer, whose ghastly crimes in the mid-1970s tainted her at age 10, when a photographer captured her in a pose that implied complicity. The notoriety clings to her, especially since the recent airing of a TV documentary on the murders. People jeer at her on the streets; a woman in a cafe dumps food on her, sneering, “You're scum, you and your father.”

The pathology in her background is reflected in her adult relationships, most of which are rather nasty. There's her mother, Iréne (Judith Magre), a vain victim of too much Botox and too many young lovers. Michéle does not hide her contempt for her mother, whom she considers grotesque. She refuses her mothers' pleadings to visit her aged, hated father in prison.

Michèle is also having a contemptuous affair with Robert (Chrisian Berkel), the husband of her friend and co-worker Anna (Anne Consigny). Her underemployed son insists she pay for a pricey apartment for himself and his pregnant, demanding girlfriend Josie (Alice Isaaz). Michéle also has a prickly relationship with her ex-husband, Richard (Charles Berling) — she divorced him after he hit her — and actively sabotages his new relationship with a young yoga instructor. At the video-game company, her employees either lust after or despise her, often both.

Obvious parallels are drawn between the violent, monster-rape video games Michéle coolly promotes and the sexual violence in her life. When someone infects all of the office computers with a monster-rape video game with Michéele's face substituted for the fantasy victim's, Michèle pays a young employee to investigate, thinking the hacker might be her rapist.

But Michèle's efforts to pursue the rapist are not quite the clever “cat-and-mouse game” promised by the plot descriptions. Rather, it's a dark wallow in Psychopathia Sexualis. When the attacker's identity is revealed, Michèle is aroused, and at one point tries to pursue a relationship with the man (Laurent Lafitte).

The idea that a woman might, on some level, enjoy rape is, by today's standards, shockingly transgressive and, of course, not for American export. But then, Verhoeven, auteur of the Sharon Stone BASIC INSTINCT crotch shot , is not averse to breaking taboos. There is also, typical of Verhoeven, a persistent religious theme: Mass on TV, Catholic icons (in a particularly alarming scene, Michèle masturbates while watching her neighbors unload Nativity statues from a truck); and the rapist's pious wife, who attributes her husband's crimes to his “tortured soul.”

David Birke's screenplay, based on a controversial novel called Oh.... by Philippe Djian, suggests a connection between the mass murder in her family background and her interest in violent sex. In the novel, Michèle is the owner of a screenwriting agency; by making her the developer of violent video games, the film tries to connect her behavior to a larger, perverse culture.

But the narrative is hopelessly nonsensical, including the rapist's final comeuppance, brought about by conditions too convenient to be believed. Disappointingly, given the level of talent involved, what might have been a portrait of a psychologically complex older woman amounts to merely a stylish exercise in sensationalism. Interesting for those who can take it, but it's clearly not for everyone. 2 3/4 out of 4 stars.
Posted by Pamela Zoslov at 1:15 AM