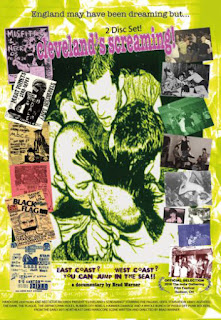 CLEVELAND’S SCREAMING is an independent documentary film about the Northeast Ohio hardcore punk scene from 1981 to 1984 in the era of Reaganomics. The real American hardcore scene was a truly local phenomenon. All across the USA every city had its own scene with its own unique character and its own tale to tell. Stories about the scenes in L.A., D.C. and New York have been done to death. It’s time we got to know what was happening in the rest of America.

CLEVELAND’S SCREAMING is the chronicle of one American hardcore scene and the people who made it. It’s about why their involvement in punk rock inalterably changed the course of their lives forever. It’s a close-up look at how the events in a single city reflect the way an entire generation’s attitudes and values were utterly transformed by this grass-roots movement. The movie features rare photos, fliers and concert footage from the vaults of Vicky Sprague, Steve-O and Jimi Imij, as well as the reunion shows of the same name put together by Jim Lanza.

Red Hour Records is proud to present CLEVELAND’S SCREAMING, now a 2 DVD set, with a special second disc with never before seen early 80s concert footage and interviews with the participants discussing Northeast Ohio’s early 80s hardcore punk scene. The documentary movie was an Official Selection at the International IndieGathering Film Festival in 2016.

For more information or to order, visit Red Hour Records.
Posted by Bob Ignizio at 12:37 PM