[CLAIRE IN MOTION opens in Cleveland on Friday January 13th exclusively at the Cedar Lee Theatre.] 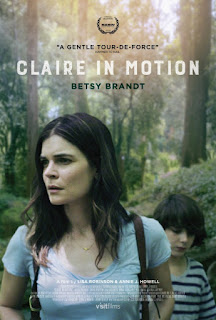 Ohio University professor of ornithology Paul (Chris Beetem) goes off for a weekend of survival camping and never returns, leaving his wife Claire (Betsy Brandt) (also a professor, of math) and son Connor (Zev Haworth) to wonder if something horrible has happened, or if he's callously left them behind. The police don't turn up much, but they do find that Paul had been working on an art project with attractive blonde hipster Allison (Anna Margaret Hollyman).

After a few weeks with no further leads, the police give up the search. Claire keeps on posting flyers and doing her own investigations, and eventually meets with Allison. Allison offers up blithe, empty headed blather, some of which is particularly tactless. She assures Claire there was nothing more than friendship between her and Paul, but even if the two never had sex, they clearly shared some kind of intimacy, as Allison seems to know things about Paul's mental and emotional state that Claire did not.

Claire forges on, hoping against hope for some sort of resolution. Instead, she finds herself in a kind of limbo. She's unsure what has happened, why it has happened, or what she should do. All things considered, perhaps Connor has the right idea when he opts out of helping his mom in her investigations fairly early, explaining, "I don't see the point."

You may well be saying the same thing to yourself after watching CLAIR IN MOTION from co-writers/directors Annie J. Howell and Lisa Robinson. It provides a dramatic showcase for Brandt, best known for a more comic relief supporting role in 'Breaking Bad', but doesn't offer much else of interest. Certainly not a satisfying resolution.

But even beyond that, the film just feels kind of "off". It's obvious through her actions that Claire is concerned for her husband, but emotionally we never feel it. Ditto for Connor, who acts as if the loss of his father is just a minor inconvenience. It also doesn't help that Francois Ozon dealt with similar material in his 2000 film UNDER THE SAND, a vastly superior film. Do yourself a favor and rent that instead. 2 out of 4 stars.
Posted by Bob Ignizio at 12:00 AM