Book Review: The Films of Sam Mendes - Under One Hour


'The Films of Sam Mendes - Under One Hour' by Michael Jolls 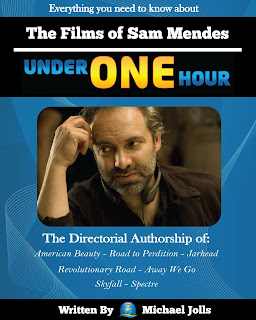 There are some directors whose style and recurring themes make it easy to label them as "auteurs". Even casual film fans have some understanding of the techniques Hitchcock uses to be the "Master of Suspense", the particular voice they can expect from a Spike Lee joint, the witty (and often profane) dialogue and hip musical soundtrack that make a Tarantino film, the visual style and complex themes to be found in a Kubrick movie.

But there are other filmmakers who, even though they are consistent in the quality of their work, don't immediately stand out. Directors who, despite a strong body of work, we can sometimes take for granted. For me, one such filmmaker is Sam Mendes.

I've liked almost all of the films directed by Mr. Mendes, starting with his award winning AMERICAN BEAUTY, one of those rare films that seeped its way into the public consciousness even though it wasn't the sort of thing that fit comfortably into the domain of mainstream "entertainment". But despite a consistency of quality in his subsequent work, I've never really thought about his films from an auteurist standpoint.

That's probably because Mendes doesn't have a typical kind of movie, at least on the surface. As Michael Jolls points out early in his new book 'The Films of Sam Mendes', the director tends to hop from one genre to another. He followed his BEAUTY, a black comedy about the American family, with the period gangster film ROAD TO PERDITION. From there, he switched gears to a movie about U.S. soldiers in the Gulf War (JARHEAD), followed by the bleak romantic drama REVOLUTIONARY ROAD and the upbeat romantic comedy AWAY WE GO. Most recently, he has taken the reigns of the venerable James Bond series, helming the last two installments (SKYFALL and SPECTRE). This could easily be the resume of some work for hire director. A skilled craftsman, perhaps, but not someone pursuing his own muse. But looks can be deceiving.

'The Films of Sam Mendes' does an excellent job highlighting the often subtle motifs and themes that recur in its subject's work. I've generally liked the films of Sam Mendes, but never really appreciated him as an auteur until reading this book. Jolls points out how ideas about the relationships between fathers and sons pop up again and again in the films of Mendes, the director's calculated use of reaction shots, and his focus on characters and actors over flashy directorial style. By the time this relatively short read is over (it's part of a series of "under one hour" reads), the seemingly disparate films of Sam Mendes have gelled together in the mind of the reader as a cohesive body of work.

Given the small number of films Mendes has directed (and the fact that this book doesn't cover his considerable work in the theater, and as a producer of films and TV shows for others), the short length is appropriate. There's too much to Mendes to cover in a mere article, but not enough (yet) for a weightier tome. So while the "under one hour" imprint and the way the chapters are broken up into 10 minute segments seems a bit gimmicky, the end result is a book of just the right length, right around 100 pages.

Jolls writes in a manner that should be accessible to casual readers, without dumbing things down to the point that more serious cineastes could dismiss his work as fluff. There's not a lot of personality to his writing, but it gets the job done, and in this case that's enough. 3 out of 4 stars.

Get the book on Amazon.
Posted by Bob Ignizio at 12:00 AM