Be My Cat: A Film for Anne (now on VOD, coming to home video in January) 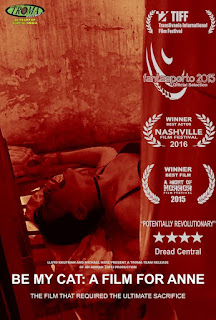 If I didn't know it was a movie, I would think it was real. That is one of the greatest and rarest compliments I could give to a found footage film.

With an astounding level of verisimilitude, BE MY CAT: A FILM FOR ANNE almost flawlessly carries the illusion through each of its unsettling layers of reality and fiction.

Supposedly constructed from video found at a crime scene, the movie is framed as the passion project of an enthusiastic and inexperienced aspiring-filmmaker Adrian (played by writer/director Adrian Tofei). He is convinced he has the perfect concept for a collaboration with Anne Hathaway. In an effort to woo the famous star with his directing chops, he hires a few struggling actresses (Sonia Teodoriu, Florentina Hariton, and Alexandra Stroe) to shoot some rehearsal scenes for the movie. He also shoots "behind the scenes" footage of the grueling, often humiliating "directing" style he puts them through. Adrian doesn't have a firm grip on what is real and what is art, and it often ends poorly for the actresses.

The initial elements of horror come from this strange psychological torture, as the actresses try their best to create this movie within the movie while dealing with Adrian's increasingly unhinged requests.

Tofei's first feature film (and reportedly Romania's first found footage horror film ever) ultimately pivots around his own truly unnerving and keenly-shaped portrayal of Adrian. He is a character with a distinct set of mental issues, physical ticks, and a strange, repeating pattern of speech, and yet the performance always feels organic. Tofei walks the spectrum from awkward oddball to giggling asshole to complete lunatic, allowing his actions to shock the audience without ever feeling forced.

So much of the film is Adrian holding and talking directly into the camera. It's a claustrophobic device that means the viewer is either uncomfortably put in the madman's shoes looking down on his victims, or the viewer is forced to face his mad rants head-on, in essence, becoming one of his victims.

The meta qualities -- Tofei essentially plays an insane alter-ego of himself, Anne Hathaway and her career are used as major plots points -- all further blur the lines between reality, the reality within the film, and the film within the film. Layer upon layer, it isn't always clear what is real, what is scripted, and what is improvised.

Furthering the effect, Tofei reportedly utilized an acting method developed by Ion Cojar, an approach where directors create circumstances where at least some of the actors' reactions would be genuine and unrehearsed.

Perhaps technically one of the most convincing found footage movies in years, the film has a genuinely frightening, snuff-like quality, reminiscent of HENRY PORTRAIT OF A SERIAL KILLER.

Unfortunately, the film seems to end before any conclusion takes place.

This glaring flaw keeps it from becoming a contemporary cult classic, but the perversion of reality, the mind-bending meta aspects, and a slowly building sense of unease -- not to mention fine work from all actors involved -- make this a disturbing and exhilarating watch.

Even for sophisticated viewers familiar with filmmaking trickery, BE MY CAT: A FILM FOR ANNE feels like watching something real and really chilling, and it is so effective that one is left to wonder if Tofei really is a madman. In this case, that is high praise, indeed. 3 out of 4 stars
Posted by Unknown at 12:00 AM