[ATTACK OF THE LEDERHOSEN ZOMBIES screens Wednesday January 18th at 7:30 pm and Saturday January 21st at 11.59 pm at the Capitol Theatre.] 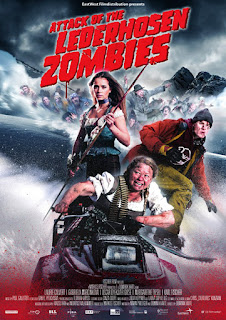 A pair of hot shot snowboarders and their manager run afoul of the toxic undead at an alpine ski resort in ATTACK OF THE LEDERHOSEN ZOMBIES. There are obvious lifts from Peter Jackson's DEAD/ALIVE (BRAINDEAD in most countries outside the U.S.) and Edgar Wright's SHAUN OF THE DEAD, but mostly it feels like a Troma film with a bigger budget. Whether that's a good or bad thing is relative.

The movie wastes little time getting in gear, as a couple of entrepreneurs with a new snow making machine try to interest a Russian investor in their machine. Unfortunately the machine has a breakdown, spewing glowing green liquid on the investor. And as any 80s horror fan knows, glowing green liquid always comes with unpleasant side effects.

Once the investor turns full-on flesh eater, he quickly spreads the disease to everyone in the local beer garden except for the snow boarders, the bartender, and the least scrupulous of the investors. And from here on out, it's standard zom-com procedure as the few human survivors try to keep the zombies at bay and avoid joining their ranks.

If you're just looking for a few gory laughs and a nostalgic eighties horror vibe (right down to the now obligatory retro synth soundtrack), ATTACK OF THE LEDERHOSEN ZOMBIES is a decent enough party movie. See it in a crowded theater with friends, and if you're so inclined, a drink or two. The production values are solid, and the mostly practical special effects are done well.

If you're hoping for something more than that, move along. This is highly derivative stuff. In particulary, the attempts at a SHAUN OF THE DEAD type romantic subplot between one of the snowboarders and his manager, on the outs because of the snowboarder's immaturity, fall painfully flat. And the dialogue, most of which is in English, sounds like English was a second (or maybe even a third) language for director/writer Dominik Hartl and co-screenwriter Armin Prediger. Which is probably true, and wouldn't matter that much except that there's way too many scenes of the characters awkwardly and inanely conversing.

When the film sticks with the gory hijinks, it fares much better. Hartl has a colorful and energetic visual style, and perhaps most importantly for a fun bit of schlock like this, does a good job staging the kills. His camera doesn't shy away from the gore, but like his obvious inspiration, Peter Jackson, he has a knack for find that place that's just over the top enough to be funny without getting uncomfortable. 2 ½ out of 4 stars.
Posted by Bob Ignizio at 12:00 AM