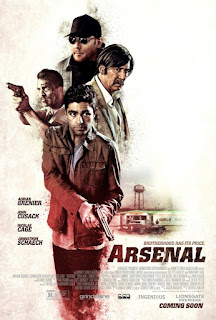 Brothers. The South. Sweat and dirt. Money problems. Drugs. Seedy hotels. Old beat up cars. A half-baked scheme to get money that inevitably goes wrong. Gratuitious violence. Gratuitious slow-motion. Gratuitous slow-mostion violence. Gratuitous Nicolas Cage in a bad wig. Gratuitous John Cusack in a do-rag. That's probably more useful than any plot synopsis I could give you for ARSENAL, the new low budget crime film from screenwriter Jason Mosberg and prolific schlock director Steven C. Miller that is inexplicably getting a limited theatrical run rather than heading straight for streaming and/or DVD and Blu Ray.

While Cage and Cusack's performances give the film what limited interest it has, the actual stars are Adrian Grenier as responsible brother JP, and Johnathon Schaech as "bad boy" Mikey. You've seen this sibling dynamic in countless other crime films, and there's nothing here that adds anything new to it. And that's pretty much the entire movie in a nutshell, whether we're talking plot, characters, or themes.

Sure, you could say to an extent that last year's HELL OR HIGH WATER explored similar territory. But that film, while certainly dealing in genre tropes, nonetheless found some fresh, timely themes to give it some weight. It also had more interesting, fully-fleshed out characters, and a first rate cast and director. ARSENAL, on the other hand, is strictly B-level.

Now, if you're in a forgiving mood and just want a little lightweight genre entertainment that delivers the goods in the action department, that's probably okay. ARSENAL may not be particularly original, but it is competently made and acted. And of course, if you're a fan of Nicholas Cage in over-the-top mode, you'll enjoy his work here.

Can I recommend it? No, not at all. I can't really trash it, either. This is nothing more or less than a disposable crime/action movie, and I guess if that's what you're in the mood for and you have the time and money to spare, it's okay. Pretty sure you could find a better way to spend 10 bucks and 90 minutes of your life, though. 2 out of 4 stars.
Posted by Bob Ignizio at 1:08 AM