All Governments Lie (January 19th and 21st at the Cleveland Cinematheque)

[ALL GOVERNMENTS LIE: TRUTH, DECEPTION, AND THE SPIRIT OF I.F. STONE screens Thursday January 19th at 8:20 pm and Saturday January 21st at 8:35 pm at the Cleveland Cinematheque.] 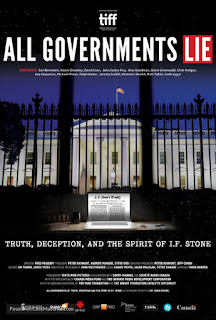 The name I.F. (“Izzy”) Stone is spoken of in reverent tones among left-leaning journalists. The investigative reporter and publisher of his own four-page newsletter, I.F. Stone's Weekly, from 1953 to 1971, Stone was a model of fearless, crusading reporting.

Basing his reporting on his analyses of government documents, Stone wrote about World War II, the Korean War, McCarthyism, the Vietnam War and the civil rights movement, and was the first reporter to question the veracity of the Gulf of Tonkin incident that Lyndon Johnson used to escalate the Vietnam War. In the '60s, you could see the puckish Stone as a regular guest on the Dick Cavett Show, critiquing the war. (Imagine seeing an antiwar journalist on late-night TV now; in many ways we've regressed, not progressed.). An annual award is given in Stone's name to honor the work of independent investigative journalists.

Stone, who died in 1989 at age 82, is the inspiration for ALL GOVERNMENTS LIE: TRUTH, DECEPTION AND THE SPIRIT OF I.F. STONE, a documentary directed by Fred Peabody. The film is less about Stone than it is a critique of the corporate news media and its many failures in the 20th century. At a time when the American public has been whipped into a state propaganda-induced hysteria seemingly intended to promote a new Cold War with Russia — the lessons are especially necessary.

The film opens with a litany of well-known political lies — Nixon declaring “I am not a crook,” Lyndon Johnson announcing military action in Vietnam on the basis of the alleged Gulf of Tonkin incident (that North Vietnamese had fired on U.S. Ships patrolling the coast of Vietnam); George W. Bush announcing the invasion of Iraq to “disarm Saddam Hussein and free the Iraqi people”; and for good measure, candidate Donald Trump braying about seeing Muslims celebrating in New Jersey on 9/11. We see Dick Cheney pushing the Iraq invasion on TV, and Colin Powell's infamous, discredited U.N speech detailing Saddam's weapons of mass destruction. “Powell's speech has moved the ball,” declares one awed cable-news commentator.

“It was the mainstream media's darkest hour,” says Ralph Nader of the Iraq invasion. “We basically blew apart the country because we wanted to get Saddam Hussein. It was one of the greatest international crimes since World War II, committed with complete complicity of the MSM that kept critical voices like ours off the air.” Journalists were eager to show their patriotism; who could forget Dan Rather (before he lost his job to Bush's lies about his military service), saying on David Letterman's show, “Bush is the president, he makes the decisions and you know, as just one American, wherever he wants me to line up, just tell me where.”

Insights about government deception and journalism's failures are provided in the film by Noam Chomsky, the MIT linguist and political dissident; Carl Bernstein of Washington Post Watergate exposé fame; former MSNBC producer Jeff Cohen (one of this film's producers); and filmmaker Michael Moore, who as a high school student solicited advice from Izzy Stone and modeled his humorous approach on Stone's. (I wonder what Stone would have made of Moore's most recent film, in which he portrayed war hawk and regime-change enthusiast Hillary Clinton as not only the better presidential candidate, but a real hot mama as well.)

Most of the film is devoted to profiling independent journalists said to be working in the I.F. Stone tradition: Amy Goodman and her staff at the Democracy Now radio and TV show; Rolling Stone writer Matt Taibbi, known for, among other things, his florid takedowns of the crooked financial industry; Glenn Greenwald and Jeremy Scahill of The Intercept, which regularly covers such issues as the U.S. government's covert drone wars and extrajudicial assassinations; the choleric Cenk Uygur, who lost his show on MSNBC for being too outspoken; and freelance journalist John Carlos Frey, who exposed the deaths of more than 200 migrants, buried anonymously in mass graves near the U.S.-Mexican border.

Oddly, even though the film includes the notorious “Collateral Murder” video of an Apache helicopter crew killing 11 civilians (including two Reuters employees), the film does not mention Wikileaks as one of the independent journalism outlets exposing government wrongdoing, or Chelsea Manning, who's currently serving hard time for leaking it.

The documentary focuses too much on the already well examined lies of the Iraq debacle but not enough on the ever-widening wars in the Middle East under Obama, who ran as the “peace” candidate, then doubled down on the worst of the Bush war policies. Only Jeremy Scahill addresses these issues, characterizing Obama as “a man who is a constitutional lawyer by training, won the Nobel Prize, [and] is presiding over an attempt to legitimize, some would say legalize, assassination as a central component of U.S policy” — assassinations that included two U.S citizens, Anwar al-Awlaki and his 16-year-old son, also American-born. Obama, Scahill reminds us, promised his administration would be the “most open and transparent” in history. Instead, under Obama there were more prosecutions of whistleblowers than by all previous presidents combined.

As the film points out, it's important to remember that major media outlets are corporations, and their primary concern is not truth, but profits. Thus CBS chairman Les Moonves said at a conference that while the candidacy of Donald Trump, covered obsessively to the exclusion of other candidates, "might not be good for America, it's damn good for CBS." All that ad money was great for the corporate bottom line. "I've never seen anything like this, and this going to be a very good year for us," said Moonves. "Sorry. It's a terrible thing to say. But, bring it on, Donald. Keep going."

The film also explains that there is an unconscious process by which journalists learn to censor themselves. They see colleagues who parrot official government versions of events advance in their careers, while those who don't get left behind. The allure of being an "insider" and cozy with government sources leads some reporters, like The New York Times' Judith Miller, to act as stenographers for Pentagon propaganda (her discredited series on Saddam's "aluminum tubes").

Izzy Stone explained how this works:

The reporter assigned to specific beats like the State Department or the Pentagon for a wire service or a big daily newspaper soon finds himself a captive. State and Pentagon have large press relations forces whose job it is to herd the press and shape the news....There are as many ways to flatter and take a reporter into camp— private off-the-record dinners with high officials, entertainment at the service clubs. Reporters tend to be absorbed by the bureaucracies they cover; they take on the habits, attitudes and even accents of the military or the diplomatic corps. Should a reporter resist the pressure, there are many ways to get rid of him. If the publisher is not particularly astute or independent, a little private talk, a hint that the reporter seems irresponsible – even a bit radical – will do the job of getting him replaced with a more malleable man.

How will the media evolve as the petulant, vindictiveTrump takes office, tweeting his rage and bashing the press? Will mainstream media find its backbone, now that the president is an outright bully, and become more than courtiers to power? Only time will tell, but we are in for a vertiginous ride. As Joshua Frank wrote recently on the Counterpunch website, “It may well be a depressing four years ahead, but at least nobody said it wouldn't be entertaining.” 3 1/2 out of 4 stars.
Posted by Pamela Zoslov at 12:00 AM