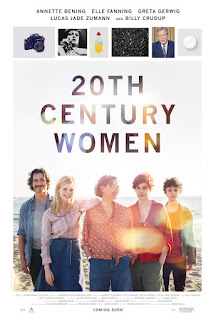 In his 2010 film BEGINNERS, writer-director Mike Mills reflected on the life of his father, who came out as gay at the age of 75. With 20th CENTURY WOMEN, he turns his attention to his mother, Jan, a strong, independent woman with a pilot's license and a bohemian sense of style. In the movie she is called Dorothea, and she is played by Annette Bening, with a cigarette — Salem, “because it's healthier” — perennially balanced between her fingers.

The film is set in Santa Barbara, California in 1979, when Jamie (Lucas Jade Zuman), Dorothea's only child and the director's alter ego, is 15. The movie opens with a gambit similar to the one in Beginners, where Mills compiles vintage photos and stock footage and re-creations of the period in which his mother grew up. These are accompanied by narration about Dorothea's life as a child of the Depression, along these lines: “Dorothea Fields was born in 1924. People drove sad cars to sad homes. But the people were real.”


Dorothea, who once dreamed of being an Air Force pilot, had Jamie when she was in her 40s. Now she's 55, divorced and living with her son in an old house under endless renovation by her hunky handyman, William (Billy Crudup). She rents a room to a young art photographer, Abbie (Greta Gerwig), who is recovering from cancer and is behind on the rent.

Jamie has a crush on a his pretty blond friend Julie (Elle Fanning), a rebellious 17-year-old who defies her parents by having promiscuous sex. Every night she climbs into Jamie's bedroom window and spends the night with him — no sex, just talking, to Jamie's pubescent frustration.

The movie's premise is that these three women, Dorothea, Abbie and Julie, each representing a different segment of the twentieth century (and each based on someone in Mills' life), influence Jamie's understanding of the world. Sitting at her kitchen table and puff-puff-puffing away, Dorothea laments to Abbie and Julie how hard it is, as a single mom, to teach her son “to be a good man.” Having tried and failed to get Jamie interested in learning woodworking stuff from handyman William, Dorothea asks the two young women to help her raise Jamie.

Abbie, with her dyed red punk haircut and Lou Reed t-shirts, takes Jamie to dank hardcore clubs and lets him drink beer and flirt with her friends. She also plies him with feminist literature. Amusingly, Jamie takes a strong interest in Our Bodies, Ourselves and Sisterhood Is Powerful, learning useful but age-inappropriate things about clitorises and annoying his mother by reading to her about the invisibility of the aging woman.

Julie tries to show Jamie how to look cool while smoking and, inadvertently, how to have his heart broken. Parental supervision is lax in late-'70s Southern California, and one day, the teen couple run off together, driving up the coast to a motel in San Louis Obispo, where Jamie comes up against the limits of the relationship.

While exploring the intersections of these oddball characters, Mills uses the interesting technique of having each narrate a bit of his or her own biography. Dorothea also talks, in retrospect, about her death twenty years later. The ghostly vocal presence imparts a pleasant chill — since Sunset Boulevard, I have always been fond of narration by dead people.

Much of the film time is taken up with Mills' particular stylistic concerns, like skateboarding culture (of which he was a part) and conflicts between Black Flag fans and and arty types who prefer Talking Heads. He peppers the soundtrack with vintage jazz , Dorothea's preferred music, imparting a Woody Allen mood. As a graphic designer, Mills created album covers for Sonic Youth and the Beastie Boys, and his visual sensibility infuses the film. Objects stand in for character, as if you could understand a person by just looking at her possessions: Dorothea's cigarettes, the wooden rabbit she carved after reading Watership Down, a bracelet worn by Bening that belonged to Mills' mom. Abbie, the photographer, does something similar in the movie, taking still lifes of everything she owns, including a framed picture of her mom and a pair of red shoes. Can meaning be found in a collection of things?

It's clear that Jan was an interesting woman, but in this tribute to Mills mère, we don't get at how and why. Mills' view is still that of a child looking up at his mother. She flew planes, she dreamed of marrying Bogart, she wrote her son liberal excuse notes when he wanted to skip school (“Jamie missed school because he was was helping the Sandinistas.”) She has a habit of making wise-sounding pronouncements like “Men always feel like they have to fix things for women.” Dorothea is shown in earlier years working in the art department of a newspaper — that's where she met Jamie's dad — but what does she do now? Is she retired, earning enough to live on from the stocks she has Jamie monitor in the newspaper every morning? You wonder about these things, whereas a child would not.

Mills seems to have a better grasp of the inner lives of the young people. His characterizations of Abbie and Julie are insightful. He goes to the trouble to create full backgrounds for them and explore their emotional lives — Abbie's experiences as an art student, her diagnosis with cervical ancer resulting from her mother's use of DES (and her mother's response as well), her impulsive seduction of handyman William. A conversation in which Julie describes to Jamie her thought process about sex shows real perceptiveness about the inner lives of adolescent girls.

The impressive style and flashes of insight don't quite compensate for the movie's preciousness or its shaggy aimlessness. Mills tries to address so many subjects — parenthood, divorce, sexuality, politics, aging, feminism, music, art, cancer — you can't help thinking he might have done better to narrow his focus and go deeper. 3 out of 4 stars.
Posted by Pamela Zoslov at 12:00 AM