The Idol (now available on home video and streaming on Netflix) 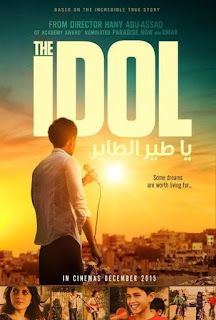 Two-time Academy Award nominated director Hany Abu-Assad (PARADISE NOW, OMAR) returns with THE IDOL, a fictionalized retelling of the true story of Mohammed Assaf, a man who went from being a Palestinian refugee to a world renowned singer.

At it’s start, THE IDOL tells the tale of two young dreamers in a refugee camp in Gaza: a brother, Mohammed, and sister, Nour, who set out to start a band with the hopes of one day playing in Cairo. Obtaining instruments is the first hurdle for the musical hopefuls, but certainly not the last. Because of Mohammed’s incredible voice, it doesn’t take long for their community to take an interest. Their first gigs, despite parental concern, are at local weddings. Nour (guitarist) believes they are destined for much bigger things and scoffs at her brother and bandmates low expectations. She serves as the motivation for her brother to work harder.

Sadly, as the young band starts finding success playing weddings, Nour suffers kidney failure. With her illness the band falls apart and Mohammed pursues music as a solo singer. In the time that Mohammed pursues singing and trying to stay by Nour’s side, a young girl, Amal, who is also receiving treatment at the hospital encourages Mohammed, or as she calls him, Tiger, to keep singing. It’s clear that all those who encounter Mohammed are immediately impacted by his voice. Ultimately Nour does not survive her illness, leaving her family and Mohammed devastated.

The films jump to young adulthood is a bit jarring following Nour’s death. The movie initially takes its time in telling the origin of Mohammed, but moves with a faster pace to track his rise to fame. Mohammed has become bitter and resentful of his lot in life, driving a taxi while still trying to find a break singing. Mohammed dreams of getting on Arab Idol (an American Idol like show). So much seems to stand in his way, but the movie quickly shows his elevation to celebrity spurred on by a run in with Amal, the girl, now woman, who was at the hospital with his sister. Again she encourages him to sing, and so he does.

Most of the film takes place with Mohammed as a young adult, but THE IDOL gives us a larger perspective by starting the film with our characters as children. No doubt, the films first half is its more successful half. It takes its time to build the characters, allowing you to care about the journey Mohammed is on and his various encounters, many of which are quite amusing.

Unfortunately, the second half of the film moves at a speed which leaves you feeling that getting through the story in a timely fashion is more important than telling a thoughtful story. THE IDOL has to catch the audience up on what Mohammed is doing as an adult, reestablish relationships, show the planning of his escape from Gaza into Egypt, getting onto Arab Idol and then watch his rise to national fame. It’s a whole lot of story told in a hasty manner. Worse yet, director Hany Abu-Assad makes a disorienting decision to cut to actual footage of the real Mohammed Assaf for the final moment of the film, despite having never used real footage prior.

It may work against any American audiences who are less familiar with Mohammed’s work. I had never heard of Assaf, his music or his story prior to viewing THE IDOL and it’s hard to say for sure whether it would have changed my experience.

At it’s best, THE IDOL is a beautifully shot film, with gentle performances and of course a story that anyone with a heart can cheer for. Regrettably, it is in the way the story is presented that seems to be the downfall. What appears to be a promising story of overcoming the odds begins to feels a bit thin by the films end. THE IDOL won’t turn off many audiences, but it’s also not the freshest take on the underdog story.
2 out of 4 stars
Posted by Joseph Anthony at 12:00 AM