[THE EYES OF MY MOTHER opens in Cleveland on Friday December 9th exclusively at the Capitol Theatre.] 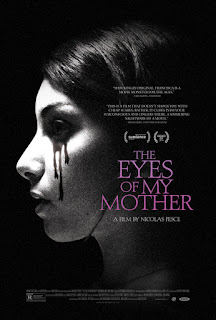 Nicholas Pesce's THE EYES OF MY MOTHER is an artfully shot and conceived film, but one that is difficult to connect with.

The film concerns Francisca, a young girl played by Olivia Bond, when we first encounter her. We see her interact with her mother (Diana Agostini), evidently an eye surgeon at one time, as she passes her skills down to her daughter. We see her father (Paul Nazak), distant and aloof. And we see a traveling salesman (Will Brill) who shows up at the family home, bringing tragedy and horror with him. What we don't see are any of the events prior to the salesman's arrival that, as much as his violent actions, must have shaped Francisca into the sociopath she is.

The depths of Francisca's mental illness become more apparent as the film flashes forward to her as an adult, now played by Kika Magalhaes. Given what we've already seen of her life, it's no surprise that she's ill-equipped to deal with the world or have relationships with other people. But she reaches out nonetheless, much to the regret of those who reach back.

It's hard to feel much of anything for Francisca. Her lot in life is sad, to be sure, but she is by no means a sympathetic character. She has little in the way of personality or defining characteristics other than loneliness and psychosis. It's frankly a bit of a challenge remaining invested in such a cypher, and the movie doesn't spend enough time with any of the supporting characters for us to care much about them, either.

And yet there's something in the way the film depicts the sort of person who longs for human contact, but is unable to experience it in the way a "normal" person would, that results in some disturbing and effective moments here and there. It's also worth singling out Zach Kuperstein's black and white cinematography, perhaps the film's strongest asset.

But what virtues THE EYES OF MY MOTHER possesses are diminished by arthouse affectations and self-consciousness. It's worth a watch for more adventurous horror fans, but hard to recommend for most viewers. 2 ½ out of 4 stars.
Posted by Bob Ignizio at 12:49 AM