The Apostate (December 8th and 9th at the Cleveland Cinematheque)


[THE APOSTATE screens Thursday December 8th at 6:45 pm and Friday December 9th at 7:15 pm at the Cleveland Cinematheque.] 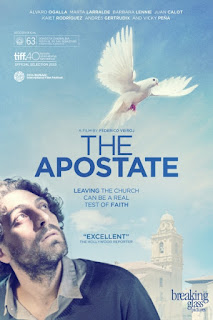 It's not easy officially purging oneself from the rolls of Catholicism, as Gonzalo Tamayo (Álvaro Ogalla) learns firsthand in THE APOSTATE. Feeling that he has no connection to the religion, and annoyed by the fact that he never had any choice about being baptized into it in the first place, Gonzalo sets out to have his baptism records rendered null and void, and in the process giving the Church one less soul to claim in its totals.

There is a process for this, called apostatizing, but it requires a great deal of dealing with bureaucracy and jumping through hoops. Most wouldn't bother, being content simply to abandon their faith without fanfare, but not Gonzalo.

But our protagonist still has a life to lead in the meantime, and it has complications of its own. For starters, he has the hots for his cousin Pilar (Marta Larralde), who is staying with Gonzalo after breaking up with her boyfriend. Gonzalo is also tutoring Antonio (Kaiet Rodríguez), a young boy who lives upstairs, and whose mother Maite (Bárbara Lennie) is clearly attracted to him.

Gonzalo is also having difficulty at school. Seems he's not only resistant to Church teachings, but those of his philosophy professor, too. The teacher is not amused at Gonzalo's efforts to reinterpret the giants in the field, and gives him a failing grade, forcing him to repeat the class (repeating classes being nothing new to Gonzalo).

THE APOSTATE is lighthearted, but not lightweight. Director Federico Veiroj, working from a screenplay co-written with Gonzalo Delgado, Álvaro Ogalla, and Nicolás Saad, deals with some fairly substantive ideas on a complex, intellectual level that nonetheless manages to find humor in its subject. The film has a decidedly European sensibility, handling issues of sexuality and religion in a matter of fact way one would be unlikely to find in a Hollywood film. On the downside, though, it tends to keep itself at a distance from its characters, never really connecting on an emotional level. Good thing, then, that it offers up ample food for thought. 3 out of 4 stars.
Posted by Bob Ignizio at 12:00 AM