The Anatomy of Monsters

[ANATOMY OF MONSTERS is now available on DVD and VOD.] 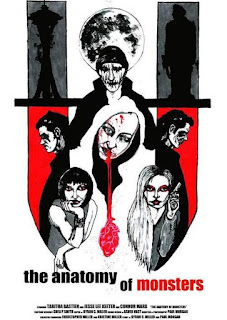 There should have been fireworks! Put two serial killers in a room together for a game of psychological (and physical) “cat and mouse,” and let’s see who comes out alive!

ANATOMY OF MONSTERS starts with this crackling, unique premise - one that could have create some real sparks between two dynamic, emotionally broken, and armed serial killers suddenly finding themselves in the company of one another.

What the film delivers, however, is two unlikable people sitting around whining about their pasts.

As the film opens, a nervous Andrew (Jesse Lee Keeter) drinks whiskey, gathers his killing supplies, and heads out to stalk local bars and clubs for victims. When Melissa (Tabitha Bastien) strikes up a conversation, it isn't long before the two head to a motel to hook up. Once inside the room, just as the young sociopath begins to unleash his fantasies of torture and murder upon her, Andrew learns that Melissa may be an even bigger psycho than he has ever been.

While each tries to get the upper hand, they share stories of from their pasts - romantic break-ups, arguments with friends, high school bullies, etc.

These terribly-acted flashbacks make up the bulk of the narrative and are meant to develop the characters's layers, which is never really accomplished.

In a story that needed to be both dialogue- and character-driven, those are two of the weakest elements in a film that has many problems.

Dialogue ranges from nonsensical, stagy “serial killer” rants to oddly inane chatter, so uninspired and unnecessary to the plot that one wonders if large chunks of the script were just improvised. And if they were, one wonders why the director thought it deserved any screen time.

A lot lays on the shoulders of the actors when the film is essentially two people in a room playing mind games, and Bastien and Keeter just aren’t up to it. Bastien is tasked with carrying much of the dialogue and story, and though she’s a truly beautiful woman, she utterly lacks the acting chops or the grit to portray a demented sociopath with any veracity or menace. Keeter forgoes any nuance in favor of your standard “yells-a-lot-while-waving-around-a-knife” style of psychopath.

Because both performances fall flat, neither character elicits much sympathy. When the final ax falls, the audience doesn’t particularly care who survives the night.

Miller tries to use this terrible and distracting editing to cut around his lack of budget and special effects, particularly in the kill scenes. Not really able to show stunts or gore, and apparently not smart enough to try something like shooting in silhouette, he just tries to edit things quickly and sloppily so the audience doesn’t really get a good look. The trick isn’t sophisticated enough and totally backfires when all the violence comes across as pretty silly.

The film starts with a juicy question: What might happen if two serial killers chose each other as prey?

Then, it answers that question: Nothing particularly scary or compelling.1 out of 4 stars