[THE AGE OF SHADOWS screens Thursday December 8th at 8:25 pm and Friday December 9th at 8:55 pm at the Cleveland Cinematheque.] 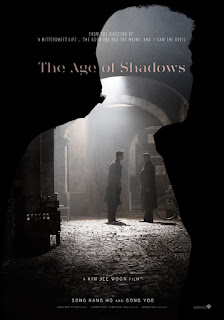 It's the late 1920s, and Korea is under Japanese occupation. Police captain Lee Jung-chool (Song Kang-ho) has thrown in with the enemy, and while he enjoys the position and power this has afforded him, his betrayal is starting to nag at his conscience. Japanese officer Hashimoto (Um Tae-goo) is ostensibly helping Lee track down the resistance, but in reality he is only out for his personal glory. And so the stage is set for this double crossing cop to switch sides yet again, or so resistance leader Che-san (Lee Byung-hun) hopes. To this end, he asks his lieutenant Kim Woo-jin (Gong Yoo) to give Lee the push he needs to come back to the side of his people.

Written and directed by Kim Jee-woon, THE AGE OF SHADOWS is a sumptuous period epic. Kim has gone the epic route before, with his quirky "Eastern Western" THE GOOD, THE BAD, THE WEIRD, but where that film had an infectious energy and sense of humor, this one is dry and slow moving. Not to mention difficult to follow at times. A few well-staged action scenes offer some entertainment value, and there's no doubt the film looks good and boasts strong performances. That's not enough to make for compelling viewing, though. 2 ½ out of 4 stars.