Whatever else you may think about SWISS ARMY MAN, it's fair to say you've never seen another movie like it. 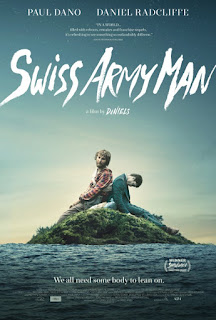 Written and directed by the team of Dan Kwan and Daniel Scheinert, SWISS ARMY MAN tells the story of castaway Hank (Paul Dano), who decides to give life another go when a bloated corpse ("Harry Potter" himself, Daniel Radcliffe) washes up on his island just as he's about to hang himself. When Hank isn't using the corpse, which he calls "Manny", as a means of flatulent transportation or a handy drinking fountain, he's bonding with it over heartfelt conversations. Whether Manny is actually participating or not is up to the individual viewer.

Yes, the film is gross and disturbing and undeniably bizarre. But it's also sincere and gentle and life affirming in a strange sort of way. By talking to a dead man, Hank begins to realize all the things he's left unsaid to the people in his old life. All the opportunities he let pass him by. At first he copes by building an elaborate fantasy world for himself and Manny in the woods, but eventually he realizes he needs to get back to the life he left behind.

Look, most people are going to flat out hate this movie. They just are. It's waaaay out of the comfort zone for most moviegoers, and easy to dismiss as cheap, stupid, and tasteless. Tasteless I'll grant you, but cheap and stupid it is not. But I imagine one has to be a little bit "off" themselves in order to engage with this film on its own terms. For better or worse, I'm a little bit "off". And so, SWISS ARMY MAN connected with me both as a cult comedy, and as something deeper and more emotional. Something deeper and more emotional that happens to have a lot of jokes about corpses farting. I expect to see this make a lot of "worst of the year" lists, but for me, it's near the top for 2016. 4 out of 4 stars.
Posted by Bob Ignizio at 12:00 AM