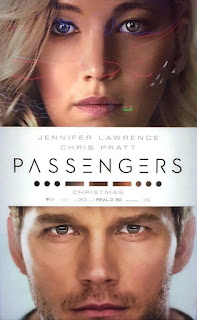 A spaceship filled with colonists from Earth is en route to a new planet. The voyage will take 120 years, so the passengers and crew are kept in suspended animation, with the ship's computer running things while they sleep. But when a meteor gets through the shields and causes systemic damage to the ship, one of the passengers is awakened from his slumber 90 years too soon. This is the promising set-up for the science fiction drama PASSENGERS, directed by Morten Tyldum from a script by Jon Spaihts.

The early riser is engineer Jim Preston (Chris Pratt). Jim quickly finds that the ship's computer is no help, and there's no way for him to go back to sleep. He tries to make the best of things, taking advantage of the ship's amenities and chatting with android bartender Arthur (Michael Sheen). But after about a year of this, Jim's at the end of his rope.

Just then, Jim notices one of the other passengers asleep in her pod: Aurora Lane (Jennifer Lawrence). He obsesses over this sleeping beauty. Learning that she is an author, he reads all of her published work. He starts to think that she's the perfect woman for him.

He starts to contemplate waking her up.

Aurora, unaware that Jim is responsible for her revival, makes the best of things. She jogs. She swims. She writes. She hangs out with Jim. Eventually, she and Jim become close. Then they become really close. All the while, Jim's secret hangs over everything.

For about its first half, PASSENGERS acts as if it wants to be taken seriously as a "thinking person's sci-fi movie". Then, it abruptly shifts gears into big budget blockbuster territory. Rather than address the ethical issues it has raised in any serious way, it instead races towards a stupid, effects-heavy climax that is no doubt meant to be thrilling, but instead feels cheap and forced.

It doesn't take much effort to imagine different, more interesting ways this film could have played out. Endings that might have been less crowd pleasing, but would have felt far more organic and earned than the one we get. Endings that would have addressed the whole creepy stalker aspect of Jim and Aurora's romance, and the huge ethical lapse Jim committed by waking her, in a more adult, believable way. Unfortunately, that's not what we get. 2 out of 4 stars.