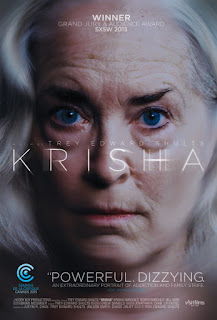 Among its many claims to awfulness, 2016 will likely go down as the year of uncomfortable Thanksgivings for many families. But intergenerational dinner table arguments about Trump and Hilary are nothing compared to the full-on dysfunctional meltdown shown in KRISHA. Maybe consider giving it a watch before or after your own holiday gathering as a way of reminding yourself, "hey, it could have been worse."

Written and directed by Trey Edward Shults, KRISHA follows the titular character (Krisha Fairchild) as she tries to reconnect with family over turkey and mashed potatoes after a lengthy schism, the reasons for which are not immediately revealed to the viewer. Brother-in-law Doyle (Bill Wise) seems supportive at first as he and Krisha chat on the porch, but there's an underlying tension to their conversation. Hell, there's an underlying tension throughout the family, underscored by the dissonant soundtrack that lets you know Krisha isn't the only one with issues.

While she's happy to see her sister Robyn (Robyn Fairchild) again, the person Krisha most wants to mend fences with is her son Trey (director Shults). This proves harder than Krisha had hoped, and in a weakened emotional state, she gives in to the demons of her addiction. Nonetheless, she moves forward with plans to cook the Thanksgiving turkey, a monstrously large bird. But inevitably, this doesn't go so well.

KRISHA is an incredible film that presents to us a stunningly confident and talented filmmaker in Shults. Particularly impressive is the way he keeps things visually interesting and fluid despite his film being set entirely in one house where family members are mostly just hanging around. Credit also cinematographer Drew Daniels, who pulls off the kind of camera moves that could easily seem showy and distracting in a way that instead feels like it perfectly depicts the emotional and psychological landscape of the characters. It's all tied up in a neat little bow by Shults taut editing.

You'd also never guess that the cast is comprised almost entirely of Shults friends and family. Every aspiring indie filmmaker should be so fortunate. And if this is what Shults can do with just $100,000, I can't wait to see what he does with a slightly more generous budget. One of the year's best, and most devastating films. 4 out of 4 stars.
Posted by Bob Ignizio at 12:22 AM