[ALWAYS SHINE is now playing in Cleveland exclusively at Tower City Cinemas and available on VOD.] 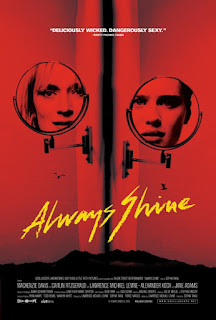 Friends Anna (Mackenzie Davis) and Beth (Caitlin Fitzgerald) are both actresses, with Beth being the more successful of the two. They also share in common encounters with pervasive sexism both at work and in day to day life. Despite her relative success, Beth still finds herself forced to take roles that require a fair amount of nudity. She's uncomfortable with it, but she needs to pay the bills. Anna still works a day job, and even though her boss makes a habit of sharing his inappropriate fantasies with her, she feels like she can't complain or quit. We see other examples, such as when Anna complains about being taken by a mechanic, and is told the mechanic would have given her a refund if she had behaved in a more "ladylike" fashion. So it's fairly clear from the outset that Sophia Takal's ALWAYS SHINE will be exploring feminist themes.

Structurally, though, it's a "B" thriller. The sort of thing one generally expects to go straight to home video or cable. The setup is that, before starting work on her next film, Beth is invited by Anna to spend a weekend at her Aunt's beach house. It seems like a good way to unwind a bit while reconnecting with a friend she hasn't seen in a while. From the beginning, though, there is tension between the two women. Anna is noticeably put off when, at a restaurant, a fan approaches Beth and asks for an autograph and photo. Then she finds a magazine did a feature on Beth that her friend never told her about. For her part, Anna can't help cutting down her friend's acting ability, and at one point asks her if she "feels like a whore" for always taking her clothes off on screen.

Things become more tense as the weekend progresses, each woman picking away at the other's weaknesses. Is this intentional, or almost like a subconscious thing they aren't always aware of? When things come to a head, we really start wondering exactly what it is that's going on as the film slides into thriller territory and then keeps right on going into something deeper and weirder. It's no coincidence that the two leads bear a strong resemblance to each other: ALWAYS SHINE plays like a riff on Bergman's PERSONA, but with a feminist point of view and a genre film sensibility. It all leads to a satisfying conclusion that brings things full circle visually and thematically.

The conceit doesn't entirely work, with the slow burn perhaps a bit too slow to satisfy the thriller aspect. There's also a subtle cheapness to the look of the film. To some extent, this is as it should be as it plays up the B-movie side, but at times that seems less an intentional stylistic choice and more just the unfortunate but unavoidable side effect of a low budget. Luckily the strength of the two central performances and the well written script overcome any budgetary shortcomings. The end result is a solid thinking person's suspense film with a satisfying pay-off. 3 out of 4 stars.
Posted by Bob Ignizio at 2:23 PM