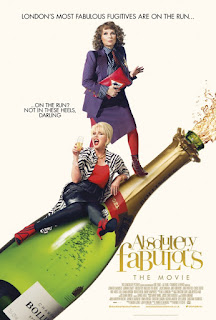 PR agent Edina Monsoon (Jenifer Saunders) and her best friend, fashion magazine editor Patsy Stone (Joanna Lumley), are still trying desperately to hold onto youth and relevance while partying like there's no tomorrow in ABSOLUTELY FABULOUS: THE MOVIE. Unfortunately, whatever clout or cachet either of them had is lost in an instant when Edina accidentally knocks supermodel Kate Moss off a balcony and into the Thames River at a party organized by Patsy.

The world, believing Moss to be dead, turns on the terrible twosome. Fleeing this justified persecution, Eddie and Pats take off for Cannes where they hope to marry Patsy off to a rich older man and thus continue to finance their lavish lifestyles.

To keep themselves stocked up on champagne in the meantime, they bring along Edina's 13 year old granddaughter Lola (Indeyarna Donaldson-Holness) with the sole purpose of using the girl's credit card. Edina's responsible, wet blanket of a daughter Saffron (Julia Sawahla) is none too pleased about this.

If you're a fan of the irreverent BBC television program from which this is a spin-off, it's safe to say you'll enjoy ABSOLUTELY FABULOUS: THE MOVIE. It still manages to mine laughs from the rich vein of the fashion and fame industries more than 20 years after its debut. Patsy and Edina do what they've always done in this context, drinking, drugging, and smoking it up as they follow every selfish whim. They are stupid, awful human beings devoid of any redeeming qualities, but they sure know how to have a good time.

In making the jump from the small to the big screen, not a whole lot has changed. The original show would on occasion take its characters to exotic locales like Morocco, so it's not as if the Cannes setting makes the film feel that much "bigger". However, it does benefit from better cinematography and an overall boost in production values. Director Mandie Fletcher does the smart thing and keeps out of the way for the most part, allowing the characters to take center stage. The end result is a film that feels pretty much like a 90 minute episode of the show. And one of the better ones, at that. It doesn't feel particularly cinematic, but it does give fans what they want.  3 out of 4 stars.