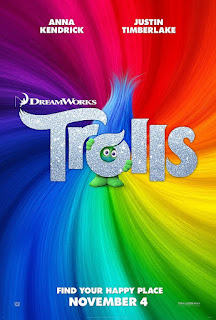 Even when it's just a cold, no parent wants to see their kid sick. But I gotta' admit, when my five-year-old asked to leave an advance screening of TROLLS about 30 minutes before the film was over because he was feeling under the weather, part of me was secretly rejoicing.

Having not stuck it out to the bitter end, I will not be assigning a star rating to my partial review. Hey, maybe that last half hour suddenly got really good. Maybe Godzilla showed up and annihilated all the happy, fuzzy haired little bastards as well as their grumpy enemies, the Bergens, with a blast of atomic breath. That would have been worth an extra star for sure. All I saw was the first two acts, though, and based on what I that, it's doubtful the movie was heading towards such a satisfying conclusion.

Anyway, here's the setup. Trolls are happy little creatures who love to sing and hug and be super nice. The Bergens are giant Ogre type creatures for whom such positive emotions and activities are totally alien. The only way the Bergens can experience happiness (and only for a short time) is by eating trolls. So they capture all the trolls and imprison them in a tree at the center of town. And for many years, they harvest their prey, who nonetheless keep a sunny disposition through it all. Until they finally decide to escape, that is, plunging the Bergens into years of misery.

Despite their past as livestock, the moronic Trolls lead a carefree and noisy existence after escaping. Only Branch (voice of Justin Timberlake) recognizes the peril his people are in, but Princess Poppy (Anna Kendrick) ignores his warnings and just tells him to lighten up. It's really just a matter of time before the disgraced Bergen Chef (Christine Baranski) finds them and captures them, putting her people's favorite delicacy back on the menu.

Of course it's then up to Branch and Poppy to join forces to free their fellow Trolls. And maybe along the way they can find some other way to bring joy to the Bergens, like helping Bergen scullery maid Bridget (Zooey Deschanel) hook up with her crush, Bergen Prince Grislte Jr. (Christopher Mintz-Plasse). Again, I don't know if the mismatched pair were successful in their efforts, but I can make a pretty good guess.

The film is peppered with unfunny jokes and annoying musical numbers (mostly pop hits repurposed for the film, but a couple of original tunes, as well). It's also kind of dark for a kid's movie. I'm not against that in principle. Certainly films like PARANORMAN and BOOK OF LIFE have managed to find the right balance of kid friendly and creepy. But the whole eating the Trolls thing just seems wrong in such an otherwise lightweight film.

So no star rating, but if you were to choose to interpret that as simply "no stars", who am I to argue?
Posted by Bob Ignizio at 12:01 AM