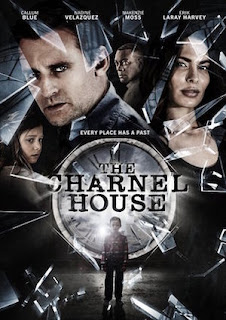 This being The Cleveland Movie Blog, I always look forward to films shot in my home town with a special kind of anticipation. Unfortunately, would-be horror film THE CHARNEL HOUSE is a major disappointment.

The premise is that an old slaughter house, secretly a murderous playground for its owner Thomas (Patrick M. Walsh), has been turned into the super fancy, state-of-the-art Fairmont Lofts by entrepreneur Alex Reaves (Callum Blue). Everything is run by computers using voice activated controls. Unfortunately for residents, there's a ghost in the machine in the form of Thomas' son Rupert (Alden Tab). When Thomas decided to kill himself rather than face justice, he tried to take Rupert with him. But whether he succeeded or not is not entirely clear at first.

Brace yourself for a whole lot of plot and backstory and very little action as Devin Pyles (Erik LaRay Harvey) moves in to investigate the building. He's looking for clues to the disappearance of his father, who worked at the old slaughterhouse until Thomas was revealed as a serial killer, and may well have been a victim. Meanwhile, Alex' daughter Mia (Makenzie Moss) is making friends with Rupert, which her mom Charlotte (Nadine Velazquez) incorrectly assumes is of the imaginary variety. A few other residents of the Lofts have subplots as well, none of which are particularly interesting.

As a horror film, THE CHARNEL HOUSE is a failure. It isn't scary, it isn't gory, and the plot moves at a snail's pace. And what's the point of making such a big deal out of all the high-tech accoutrements if the film isn't going to pay them off? The bland direction of Craig Moss further detracts from the proceedings, and the cast, while competent, mostly deliver their lines with the stiffness of soap opera actors. It's the kind of film that, although only 90 minutes long, feels like it has overstayed its welcome long before the closing credits roll. 2 out of 4 stars.