[THE 18TH ANIMATION SHOW OF SHOWS screens Saturday December 3rd at 9:10 pm and Sunday December 4th at 4:15 pm at the Cleveland Cinematheque.] 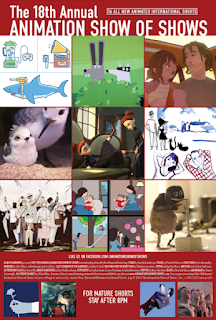 It's only fitting that Ira Glass of NPR's 'This American Life' shows up as narrator at one point in the 18TH ANIMATION SHOW OF SHOWS. Much of the program has an air of NPR/PBS about it, arty and intellectual but not too arty and intellectual, exuding lighthearted whimsy, slice-of-life observations, and gentle liberal values.

Not that there's anything wrong with that. It does get a bit repetitive after a while, though. One keeps hoping for something with a bit more zing or, dare I say, edginess to come along. Or maybe something with a bolder, more experimental animation style. So it actually feels kind of refreshing when the more polished, mainstream animation of Pixar studios offers a change of pace with "Piper".

Finally, about halfway through the fest, we get a little weird with Kristian Pedersen's dark, abstract short "The Boygen". It won't be everyone's cup of tea – heck, I'm not even sure it's mine – but it does create an ominous mood, and certainly stands out from what has come before.


Then it's back to more comfortable territory as we visit a sleepy classroom in "Afternoon Class" and pay tribute to a selfless mother in "About a Mother". Agreeable enough fare, to be sure. But truth be told, at this point I found myself wishing for something along the lines of a Bugs Bunny cartoon. At least "Exploozy" comes close to that sort of humor in its depiction of a new killer app that turns ideas directly into animation, no actual talent required.

And then we reached the final four shorts, and the festival took a sudden but welcome turn towards the dark side. No Bugs Bunny by a long shot, but neither do these final shorts play it safe. Personal favorite: "Manoman", in which a man in primal scream therapy pukes up a murderous doppelganger. It serves as a fitting counterpart to the more benign doppelganger seen in the fest's second short, "Shift", in which a reserved woman finds her more primal counterpart. I also quite liked "Blue", an effective visualization of depression. 3 out of 4 stars.