No Pay, Nudity (November 28th at the Cleveland Cinematheque)

[NO PAY, NUDITY screens Monday, November 28 at 7 pm at the Cleveland Cinematheque. The director will be on hand for the screening.] 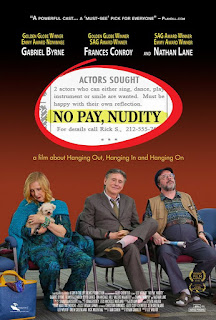 A sweet and heartfelt portrait of actors, NO PAY, NUDITY is refreshing in that it approaches the subject not through the eyes of tight-boded aspiring starlets or famous masters of their crafts, but rather through the experiences of an over-the-hill gaggle of has-beens and never-quite-weres.

The film opens on out-of-work actor Lester Rosenthal (Gariel Byrne) drudging through New York, carrying his beloved dog to the vet. After some awkward interactions about his former soap opera career, Lester learns that Max must be put down.


While I could see the argument that killing a dog within the first three minutes is a bit manipulative, it is then touchingly used as a device to distinguish those that are truly good and caring within the story.

The ones who seem to understand Lester's loss the most are a trio of fellow aging actors (Frances Conroy, Nathan Lane, Boyd Gaines) who all hang out together in the Equity Office waiting for work. Almost unintentionally, the groups takes a young actor who just arrived in town under their wings, trying to give him advice while still struggling with their own careers.

In a story that avoids being ham-fisted, Lester is reminded of the importance of pursuing it for the love of it and not for "success."

The title is a nod to the often degrading nature of an actor's life, and a marvelous and moving first act displays a real grasp on the many quiet indignities that often come with being a performer.
The scenes when this talented group of actors are all onscreen together are the film's liveliest and most endearing parts. The film may have benefited from more of those ensemble moments, especially later in the film.

The third act feels rushed, lacking the climactic moment and big emotional payoff after Lester learns his lesson. Then the film quickly ties up most of the story's subplots with a short montage set to music.

Canton born actor Lee Wilkof makes his directorial debut here, and the film is definitely an adoring letter to the perseverance and passion it takes an actor to endure, just to make their art.

Wilkof has a unique voice as a guy who's been in the game for decades, and he honestly captures the sweet and the sour - those touching moments when actor-friends support each other, while still addressing the inherent friction and desperation that comes with competing for work.

These are people the audience cares about and characters worth spending time with.

As an unashamed kiss to performers, NO PAY, NUDITY is about loving one's art for art's sake, and not for the money, fame, or even respect. Afterall, none of those things are usually perks of the biz.