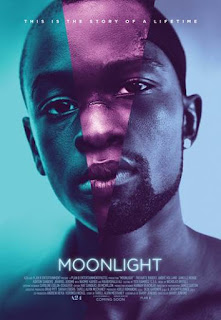 A group of schoolboys are a blur as they chase a classmate, taunting and tormenting him through a Miami neighborhood filled with abandoned houses. The boy, Chiron (Alex Hibbert), takes refuge in a boarded-up apartment, weeping silently as his persecutors bang loudly on the doors and windows.


A sympathetic drug dealer named Juan (Mahershala Ali) rescues Chiron (pronounced “Shy-RONE”) and takes him out for a meal. Chiron, known to all as “Little,” refuses to speak, a taciturnity that persists into adulthood. Chiron's mother is practical nurse and, it emerges, a crack addict. His father is not in the picture. Juan becomes an unlikely father figure to Chiron, and Juan's sympathetic girlfriend, Teresa (Janelle Monáe), gives Chiron the tender mothering he desperately needs.

Chiron begins showing up at Juan's house after school. Juan takes him to the beach and patiently teaches him to swim. Chiron's mother Paula (British actress Naomie Harris), resents the couple's usurping of her parental role, especially since she's a customer of Juan's. “You gonna raise my son now?” she says to Juan when he confronts her as she's getting high in a car near the corner where he's dealing. She taunts Juan. “You gonna keep sellin' me rocks?” You ain't shit!”

Emotional doors open, then close for Chiron, and it feels as though he has nowhere to turn. His schoolmates torment him and call him “fag” before he even knows what that is. His mother berates him and neglects him and, in desperate moments, begs him to love her. One of the strengths of the script is its compassion for everyone. In a quietly devastating scene, Chiron asks Juan, “Do you sell drugs?” Reluctantly, Juan says yes, disappointed in himself, it seems, because mentoring Chiron has brought out his best self. About his mom, the child then asks, “She do drugs, right?” At this moment we realize, as Chiron does, that there is no one he can fully trust.

The film is divided into three sections, with Chiron portrayed by three actors. Ashton Sanders plays Chiron at 16, and Trevonte Rhodes is the grown-up Chiron, who now calls himself “Black.” The adolescent Chiron, still persecuted by his peers, has a sexual awakening with a classmate named Kevin (Jharrel Jerome). But Kevin, like so many others in his life, betrays him by joining in the violent bullying of Chiron.

The final act, the slowest and dramatically least satisfying, has Kevin (André Holland) reaching out to Chiron, who is now a drug dealer in Atlanta, wearing gold chains and grills. Both men are now in their early '30s and have done prison time. The film elides what has happened in the intervening years, and an air of menace hangs over their reunion, as if the lingering high-school grudge might erupt in violence. Are we meant to think this, having seen Chiron threaten an underling he's accused —jokingly, it turns out — of coming up short on his money? But, the theme isn't violence, it's forgiveness and tentative love.

MOONLIGHT could be criticized for trading in stereotypes— drug dealers and crack addicts and neglectful single mothers in hopeless ghetto neighborhoods — but it's derived from lived and felt experience. It is based on elements of McCraney's life, and both McCraney and director Jenkins grew up in Miami's rough Liberty City neighborhood. It's tempting to compare this sensitive, poetic film with the overwrought PRECIOUS of a few years back, a sick wallow in racial demonology. This film is Apollonian — no fried-chicken stealing or TV-set throwing here. The scenes are quietly effective: a seemingly mundane scene of young Chiron squeezing dish soap into a dingy bathtub in his shabby apartment has power because it feels real.

In Greek mythology, Chiron the centaur is called “the wounded healer.” Born of rape and rejected by his parents, he was poisoned with an incurable wound by Hercules. Said Carl Jung of this archetype, “It is his own hurt that gives a measure of his power to heal.” By the third act Chiron, like his mythological namesake, is poised to heal his own life and maybe those of his remorseful mother and the friend who wounded him. 4 out of 4 stars.
Posted by Pamela Zoslov at 12:00 AM