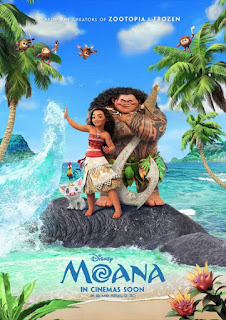 The latest film off the Disney assembly line is MOANA. It tells the story of the titular teenage Polynesian princess (voice of Auli'i Cravalho) who, against her family's wishes, leaves her island on a quest to return a magic stone called the Heart of Te Fiti to the goddess who is its rightful owner. Fist, however, she needs to enlist the aid of the demigod who stole the rock in the first place, the fun loving but arrogant Maui (Dwayne Johnson).

All Maui cares about is getting his magic fish hook back, which will return his powers of shape-shifting. Thanks to a little bit of nudging from the Ocean itself, however, he eventually agrees to help the young girl, and they embark on a series of adventures on their way to confront an angry lava demon and, hopefully, complete their quest.

There's no doubt that MOANA follows the Disney formula. The screenplay, credited to Jared Bush but worked on by several writers before him, is yet another "hero's journey" plot with a youthful protagonist. As is so often the case with Disney, she's also literal princess, and her journey of self discovery is just as important, if not moreso, than returning the stone. The whole thing is wrapped up in the trappings of an "exotic" culture (in this case, that of south Pacific islanders) to give it a little flavor and some surface distinction from other House of Mouse products. And there are songs meant to keep kids singing long after they leave the theater ala "Let it Go" from FROZEN..

For the most part, it works. A lot of that is down to the voice actors, with Dwayne Johnson perfectly cast as a heel with a heart of gold. His "sexiest man alive" charisma comes through even though Maui is depicted as something of an obese oaf, a depiction which has drawn criticism of negative stereotyping from some quarters. And newcomer Cravalho, herself roughly the age of the character she voices, comes across as genuine. There's also a nice turn from Jemaine Clement ('Flight of the Conchords', WHAT WE DO IN THE SHADOWS) as a secondary villain who gets one of the film's best musical numbers.

But as much as the film succeeds as pleasant family entertainment, there's no doubt it's a bit too cookie cutter of an affair to be on the same level as recent Disney hits like FROZEN, BIG HERO 6, and this year's ZOOTOPIA. Nothing wrong with that; just moderate your expectations accordingly. 3 out of 4 stars.