[I AM THE PRETTY THING THAT LIVES IN THE HOUSE is now available on Netflix streaming.] 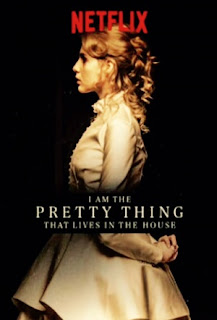 Although it hasn't exactly set critics on fire (and if Rotten Tomatoes is to be believed, regular viewers have been even less enthusiastic), I personally found I AM THE PRETTY THING THAT LIVES IN THE HOUSE to be an excellent example of quiet, psychological horror. The closest comparisons would be to Robert Wise's 1963 version of THE HAUNTING and John Hancock's 1971 obscurity LET'S SCARE JESSICA TO DEATH. One may also note similarities to Stanely Kubrick's 1980 film version of THE SHINING.

PRETTY THING works in disconcerting ways, creating a subtle atmosphere of supernatural terror while, at the same time, exploring the rocky psychological terrain of its fragile main character. It is not fast paced, action packed, or easily digestible, and will likely require more than one viewing to fully appreciate.


This is a very minimalist film, keeping to one location and limiting its cast of characters to five. Although for the most part it focuses on only one of those characters: hospice nurse Lily (Ruth Wilson), an insecure young woman very much in the mold of THE HAUNTING's Eleanor Vance. She's just the sort who is ripe for falling prey to the spirits who are, as the film's opening narration informs us, the true owners of the house where Lily tends to dying horror novelist Iris Blum (Paula Prentis).

Plot is minimal, too. The film gets by largely on atmosphere and literary-sounding narration that could have been pulled straight from a lost manuscript by 'The Haunting of Hill House' (basis for THE HAUNTING) author Shirley Jackson. And like both THE HAUNTING and JESSICA, PRETTY THING gets much mileage out of exploring the female psyche. It also helps that writer/director Oz Perkins is so meticulous in both his writing and his shots, which are at times Kubrickian in their composition.

The obvious criticism, of course, is that nothing much really happens in the film. We do see what are evidently supernatural phenomena, but most of the real action takes place internally in Lily's psyche. That's just not the sort of thing that resonates with most viewers used to lots of action and special effects in their horror movies. But for those who like their scares more subdued and intellectual, I AM THE PRETTY THING THAT LIVES IN THE HOUSE is something of a minor masterpiece. 3 ½ out of 4 stars.
Posted by Bob Ignizio at 12:00 AM