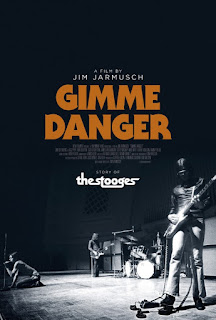 To casual music fans, Iggy Pop is probably best known (if known at all) for solo hits like "Lust For Life", "The Passenger", and that execrable duet he did with Kate Pierson, "Candy". But hardcore music devotees know that Pop's most influential and important work was done in the late sixties and early seventies when he fronted proto punk/metal band The Stooges. It is that aspect of Pop's career that Jim Jarmusch's engrossing new documentary GIMME DANGER focuses on.

Signed to Elektra Records by savvy A & R man Danny Fields as the cheaper part of a "twofer" with The MC5, the world was not ready for The Stooges when their debut self titled album was released in 1969. The group would manage to limp along in one for or another until 1974, releasing another 2 albums before falling apart more than breaking up.

Jim Jarmusch begins his documentary of the band with this inauspicious ending before going back to tell the story from the beginning. Iggy Pop does the lion's share of the talking, but drummer Scott Asheton, second guitarist James Williamson, and Elektra's Fields all provide a substantial number of memories and anecdotes as well. Occasional member saxophonist Steve Mackay also gets to chime in once or twice. Guitarist Ron Asheton had passed away before Jarmusch began shooting the film, but he gets to speak via a few archival segments. It all adds up to, if not a complete history of the band, then about as complete of one as most people would ever need (Those still wanting to know more are directed to Legs McNeil and Gillian McCain's oral history book of punk rock, Please Kill Me).

Born James Osterberg, the future Iggy Pop grew up in a trailer. Not in the trailer park sense, but the sort used for camping. Obviously a bit out of the norm, Iggy's parents allowed him to set up a drum kit in their small lodgings. Iggy played drums for various garage bands, and even backed up blues and Motown groups when they would play gigs for white audiences, but eventually he had to follow his muse. And that muse was the sound of a factory metal stamper going "clang, clang, clang". But you don't need me to recount the many entertaining stories of this seminal band's luckless career. That's what GIMME DANGER is for, and it does it quite well.

Jarmusch doesn't deviate much from the usual rock doc formula, but why would he? Yes, it's the same old rise, fall, breakup, and reunion (accompanied with long overdue recognition) that we've seen numerous times on 'Behind the Music' and in other rock docs, but it's never boring. The Stooges were the sort of band who not only made a mark on music, but were characters as well, and their rock n roll war stories are never dull. There are ample moments of humor, such as the story of how Ron Asheton called up Moe Howard of the Three Stooges to ask permission to use "The Stooges" as a band name. And on the other hand, there's an element of tragedy considering how many of the principals never lived to see the finished film.

But first and foremost, GIMME DANGER is a celebration of a band that deserves to be celebrated, and a much-needed vindication that bowing to commercialism may bring short term success in the music business, but staying true to your own vision can transform a garage band from Detroit into immortal rock legends. 3 ½ out of 4 stars.
Posted by Bob Ignizio at 12:00 AM